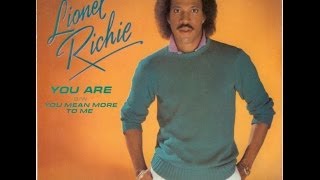 Lionel Richie - You Are (Music Video)

Personnel: Lionel Ritchie (vocals); Kenny Rogers, Alabama (vocals); The Commodores.
Producers: Lionel Ritchie, James Anthony Carmichael, Joe Wolfe, The Commodores.
Compilation producers: Lionel Ritchie, Harry Weinger.
Includes liner notes by Steven Ivory.
This is part of "20th Century Masters: The Millenium Collection" series.
Eight months after Motown/UTV released the excellent Definitive Collection, the first truly comprehensive Lionel Richie collection, they released another solid Richie comp by giving him an entry in their 20th Century Masters - The Millennium Collection series. While this is not nearly as exhaustive as Definitive, it does contain many of the basics -- namely "You Are," "All Night Long (All Night)," "Hello," "Say You, Say Me," "Dancing on the Ceiling" -- as well as three Commodores tracks ("Zoom," "Lady [You Bring Me Up]," "Jesus Is Love") that were not on Definitive, along with the fine solo hit "My Love," which was the one track not on the previous compilation that really should have been included. There are a lot of songs that should have made the cut if this was going to be a truly representative, excellent 11-track recap of his solo career -- "Running With the Night," "Endless Love," "Truly," and "Penny Lover," to begin with -- and the Commodores tracks on Definitive fit the soft rock vibe of his solo career better than those featured here, but this isn't bad for a budget-line compilation, since it's an enjoyable, concise sampler. ~ Stephen Thomas Erlewine

27%off
Lionel Richie
Dancing on the Ceiling [Bonus Tracks]
$9.49 on Sale
Add to Cart