From out of space... A warning and an ultimatum 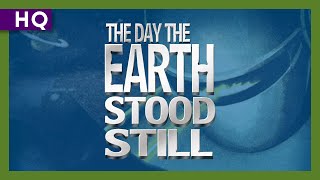 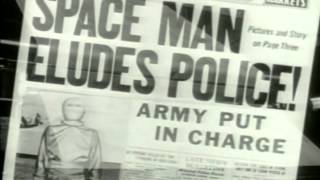 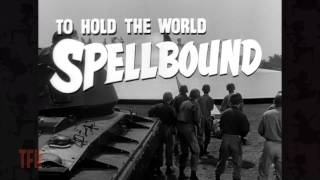 Mick Garris on THE DAY THE EARTH STOOD STILL (Featurette)

A spaceship lands in Washington D.C., capturing the attention of the world. But the alien emissary (Michael Rennie) it brings refuses to reveal his mission to any single government, leaving the military, the politicians, and millions of ordinary people to wait in fear. Soon their distrust turns to call for violence. But one young woman and her son (Patricia Neal, Billy Gray) befriend him...and soon realize that they may be all that stands between the human race and total destruction.

Beginning with a documentary style that immediately hooks the viewer, THE DAY THE EARTH STOOD STILL, based on the Harry Bates short story "Farewell to the Master," becomes as much a human interest story as it does a sci-fi B-movie classic. The film soberly depicts the arrival of an alien dignitary, Klaatu (Michael Rennie), who has come to earth with his deadly robot, Gort (Lock Martin), to deliver the message that earthlings must stop warring among themselves--or else. After being shot at by ignorant, panicky military guards, Klaatu is brought to a Washington, D.C., hospital, where he begs a sympathetic but frank Major White (Robert Osterloh) to gather all the world's leaders so he can tell them more specifically what he has come 250 million miles to warn them about. Losing patience, Klaatu slips into the human world, adapting a false identity and living at a boarding house where he meets a smart woman with a conscience, Helen Benson (Patricia Neal), and her inquisitive son, Bobby (Billy Gray). Both mother and son soon find themselves embroiled in the complex mystery of Klaatu, his message, and the government's witch hunt for the alien. Made during the cold war--when Americans were obsessed with the destructive capabilities of the atomic bomb--THE DAY THE EARTH STOOD STILL, thanks to its beautiful pacing, excellent dialogue, and haunting score by Bernard Herrmann, is still a treat for contemporary audiences.

19%off
Journey to the Center of the Earth
$12.20 Super Savings
Add to Cart


One of my favorite movies. I never get tired of of watching this movie. Its fantastic.


THIS PICTURE IN MY OPINON,IS ONE OF THOUGHT PROVOKING MOVIES OFF ALL TIME.IS IT A BIT OUTDATED?MAYBE,BUT FOR GREAT MOVIE MAGIC AND SOLID ACTING FROM ALL CAST MEMBERS IT IS A DELIGHT TO WATCH OVER AND OVER AGAIN.SO FOR MY MONEY THIS PICTURE IS A SURE FIVE STAR GEM.I HOPE YOU GET THE SAME ENJOYMENT OUT OF IT THAT I DID....THANK YOU D.C.


This is a must for any Sci-Fi collection!
Klattu come from who knows where and basicly says 'You know, if you guys want to kill each other that's fine with us, we don't care. But here's the deal, you start trying to involve us or bring your petty problems to our turf, we will have no alternative but to simply solve your problems for you by vaporizing the entire human civilization. Remember, the universe dosen't revolve around your petty little lives.'

This movie looks great on a large screen HDTV, even to the extent that you can see some of the wire holding Miss O'Neal up when Gort holds her.

There are some nice extras added with this move too.


Well, as the review title says - it says it all. Some alien race out there doesn't like the idea of their barbaric neighbor (guess who?) toying around with nuclear weapons with a background of constant wars, hatred, distrust, etc. Can you blame them?

Hey Earthlings, if you can't get your act together, we'll just destroy you before you destroy yourselves (and probably us too!).

So, of course we have a love interest and a robot to boot, but hey, these are the 50's, right? The good ol' military, when we were the strongest power on Earth - who are these aliens and who do they think they are, landing one of their saucers in Washington DC and threatening us like that!?

We're Americans, and we won't take it!!! Well, looks like we had to - and there's a lesson to be learned (and probably still needs to be learned), from this. Boy, do we really need Michael Rene badly now!


This honest-to-goodness SF classic excellently casts Michael Rennie as an interplanetary emissary, sent to Earth to warn it to "settle down" and stop using nuclear weapons or be burned to a crisp. The convincing factor is an ominously threatening robotic cop called Gort, which has the frightening power of mass destruction never envisioned by us earthlings. No super-dooper digital special effects here, just enough to get the point across... these two are NOT to be taken lightly and they do NOT suffer fools gladly. For SERIOUS SF fans (those who demand credible science in their fiction), this is an all-time classic with a fine early co-performance by the celebrated Patricia Neal (The Fountainhead with Gary Cooper, and Day of Infamy with John Wayne and Kirk Douglas).


Classic sci-fi "message" film that comments on trust, honor, tolerance, compassion, relationships and good ol'1950's paranoia. Marvelous story line repleat with subtle humor, fear, suspense...and even an Einstein-esque Sam Jaffe before his Dr. Zorba role on Ben Casey (anyone remember Ben Casey? No?). The film's opening sequence is top-drawer perfection. Special effects are believable and restrained, serving mainly to accentuate the plot line. If not the best sci-fi film ever made, certainly among the top 10.