Sex and the City 2 R 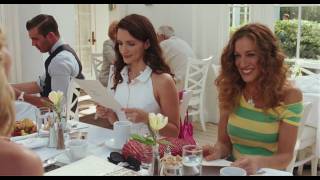 Hollywood Reporter - 05/23/2010
"[It] has the returning cast members in fine comic form, and it has more cutting-edge humor than the first movie....This picture is going to be a smash."
Variety - 05/23/2010
"There are good sequences sprinkled in, where the movie sparks to life, from a karaoke version of 'I Am Woman' to Charlotte and Miranda -- over several cocktails -- discussing the struggles, frustrations and guilt associated with motherhood."
Total Film - 05/25/2010
3 stars out of 5-- "[A] film as polished, savvy and calculating as Samantha Jones herself."

The stars of the hit HBO series reunite with original writer/producer/director Michael Patrick King to deliver this sequel that finds the ladies venturing outside New York City for the adventure of a lifetime. Carrie (Sarah Jessica Parker), Charlotte (Kristin Davis), and Miranda (Cynthia Nixon) are all married now, but they're still up for a little fun in the sun. When Samantha (Kim Cattrall) gets the chance to visit one of the most extravagant vacation destinations on the planet and offers to bring them all along, they surmise that a women-only retreat may be the perfect excuse to eschew their responsibilities and remember what life was like before they decided to settle down.