In pre-World War II London, Spanish agent Denard struggles to close a high-level business deal that will strike a blow against fascists in his native country. But industrialists not yet alert to the threat of fascism reject him. 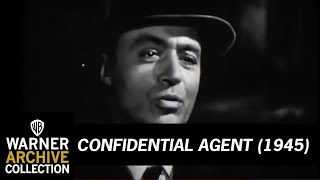 In pre-World War II London, Spanish agent Denard struggles to close a high-level business deal that will strike a blow against fascists in his native country. But industrialists not yet alert to the threat of fascism reject him. A teenage ally caught up in his efforts is murdered. And the mission itself seems a failure. Yet neither the story nor Denard will stop there.

Charles Boyer plays Denard and Lauren Bacall is a jaded industrial heiress who assists him in this intricate spy drama. For her second screen appearance, Bacall took a critical thumping, yet her presence smolders. The film itself still satisfies, thanks in no small measure to James Wong Howe's atmospheric cinematography and the story craft of source novelist Graham Greene.

A Graham Greene novel was the source of the Warner Bros. espionage thriller CONFIDENTIAL AGENT. Charles Boyer stars as Denard, a former concert musician operating as anti-Fascist secret agent in the Spanish Civil War. While negotiating with the neutral British for some much needed fuel supplies, Denard falls in love with gorgeous Rose Cullen (Lauren Bacall) Sympathetic to his cause, Rose helps Denard contend with such backstabbing villains as Contreras (Peter Lorre) and Mrs. Melandy (Katina Paxinou, who'd ironically won an Academy Award for her sympathetic potrayal in another Spanish Civil War drama, FOR WHOM THE BELL TOLLS). Critics in 1945 liked CONFIDENTIAL AGENT but trounced leading lady Lauren Bacall, suggesting that she was merely a pretty amateur who'd coasted to stardom via her associations with actor Humphrey Bogart and director Howard Hawks. At this point in her career, Bacall was inclined to agree with her detractors-though in time, she certainly proved them wrong.

Action | Enemies | Death | Spies | Thriller | Nazis | Espionage | Spy | Spain | Love | Weapons
This product is made-on-demand by the manufacturer using DVD-R recordable media. Almost all DVD players can play DVD-Rs (except for some older models made before 2000) - please consult your owner's manual for formats compatible with your player. These DVD-Rs may not play on all computers or DVD player/recorders. To address this, the manufacturer recommends viewing this product on a DVD player that does not have recording capability.

Come to the Stable
$19
Add to Cart