Suspense as startling as a strangled scream! 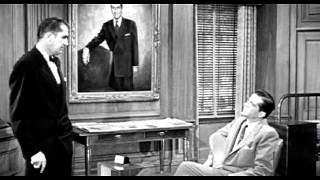 While The City Sleeps - Trailer (Clip)

"Ask mother," says the message scrawled in lipstick at a murder scene by an unknown serial killer who preys on women. It's a sensational story -- if it bleeds, it leads -- and a news conglomerate offers a big promotion to the high-level company exec who solves the case. So begins the wheeling, dealing and backstabbing of the competing media hotshots as they vie to unmask the so-called Lipstick Killer.

WHILE THE CITY SLEEPS is one of Fritz Lang's must successful American movies and a classic of the psychological Noir genre. It is not merely a thriller, but rather a multi-layered vision of the power and problems both of the press and of humanity's all-encompassing greed. The editor of a flailing New York City paper dies just as a series of sex murders sweep the city. His dastardly son (Vincent Price) takes over the paper and pits three rival editors against each other in a contest to see which one of them can crack the case and identify the killer. As the murderer continues to stalk the city's women, the reporters go all out to catch him in hopes of securing the top spot at the newspaper. While several of the editors use their girlfriends to bait the killer, airing taunting television spots attempting to rouse his anger, Lang paints a portrait of professional greed and moral weakness in the face of physical danger. Set both in stark glass-walled newspaper offices and in the dark and dense streets of New York City, the killer's crimes take a back seat to the film's focus on the dog-eat-dog race of the three editors to win the favor of the newspaper's owner.

The Spiral Staircase
$19
Add to Cart

All the President's Men
$10.90 ENDS TONIGHT
Add to Cart