Working with his fiancee's father, a newspaper publisher, a novelist frames himself for murder, intending to produce exonerating evidence at the last moment. But the publisher suddenly dies, the evidence is lost... 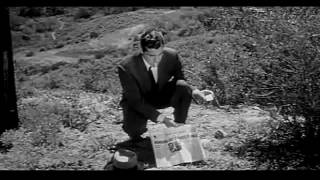 Beyond a Reasonable Doubt 1956 Trailer

After director Fritz Lang vaulted to prominence with such masterpieces of German cinema as Metropolis and M, he brought his art to Hollywood films, including Fury, Ministry of Fear, The Woman in the Window and more trenchant tales of innocents caught in a web of seeming guilt. His last U.S. movie is this intriguing film noir about a novelist (Dana Andrews) out to expose the injustices of capital punishment. Working with his fianc?e's (Joan Fontaine) father, a newspaper publisher (Sidney Blackmer), he frames himself for murder, intending to produce exonerating evidence at the last moment. But the publisher suddenly dies, the evidence is lost...and that's only the first twist in a brilliantly layered plot ideally suited to Lang's talents.

Crusading publisher Austin Spenser (Sidney Blackmer) wants to prove a point about the insufficiency of circumstantial evidence. Spencer talks his prospective son-in-law Tom Garrett (Dana Andrews) into participating in a hoax, the better to expose the alleged ineptitude of conviction-happy DA (Philip Bourneuf). Tom will plant clues indicating that he is the murderer of a nightclub dancer, then stand trial for murder; just as the jury reaches its inevitable guilty verdict, Spencer will step forth to reveal the set-up and humiliate the DA. Somewhat surprisingly, Tom eagerly agrees to this subterfuge. Unfortunately, an unforeseen event renders their perfectly formed scheme useless. BEYOND A REASONABLE DOUBT was the last American film of director Fritz Lang.

Justice | Psychodrama | Injustice | Murder | Film Noir | Courtroom | Crime
This product is made-on-demand by the manufacturer using DVD-R recordable media. Almost all DVD players can play DVD-Rs (except for some older models made before 2000) - please consult your owner's manual for formats compatible with your player. These DVD-Rs may not play on all computers or DVD player/recorders. To address this, the manufacturer recommends viewing this product on a DVD player that does not have recording capability.

Once Upon a Time in America (Extended Director's Cut)...
$10
Add to Cart

31%off
Stranger on the Third Floor
$8.98 BLACK FRIDAY
Add to Cart

Customer Rating:
Based on 5430 ratings.

a must have movie from a master director Movie Lover: gerard corbin from SARCELLES, VAL-D'OISE FR -- April, 4, 2013


from a simple thriller Fritz lang makes up a real philosophical tale about what is real and fake.
But in the end manhood is always guillty
the casting is, as usual, very good.
This is a short movie which tells you more than any other so called "suspense" film