An unmarried fashion-magazine editor wears a wedding ring, hoping to deter male colleagues who have more than business on their minds. Then a smitten artist learns her secret and begins passing himself off as her beloved hubby. 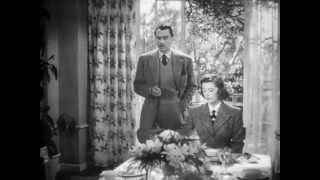 Third finger, left hand. That's where unmarried fashion-magazine editor Margot Sherwood Merrick (Myrna Loy) parks a wedding ring, hoping to deter male colleagues who have more than business on their minds. Then a smitten artist (Melvyn Douglas) learns Margot's secret and begins a charade of his own by passing himself off as her beloved hubby.

Loy and Douglas, expert romantic farceurs who sparkled in some of Hollywood's best romantic comedies (including Mr. Blandings Builds His Dream House) are splendidly sophisticated and delightfully goofy in their first film together. "I adored him," Loy said of the man who became her longtime friend off screen. Their camaraderie rings some funny on-screen wedding bells.

This box-office smash comedy of manners featured the popular Myrna Loy as Margot Sherwood Merrick, the stodgy editor of a glamorous women's fashion magazine. To protect herself from suitors and jealous wives of businessmen, she wears a gold band on the third finger of her left hand and pretends that she is married. But the wolfish artist Jeff Thompson (Melvyn Douglas) is undeterred. After his efforts to romance Margot fail repeatedly, her icy exterior finally melts and the two become involved. She then has to explain the ring to all her cronies. Jeff's idea is to pretend to be her long-lost husband, but this plan backfires and leads to some comic complications.

Romance | Romances | Love
This product is made-on-demand by the manufacturer using DVD-R recordable media. Almost all DVD players can play DVD-Rs (except for some older models made before 2000) - please consult your owner's manual for formats compatible with your player. These DVD-Rs may not play on all computers or DVD player/recorders. To address this, the manufacturer recommends viewing this product on a DVD player that does not have recording capability.