Madonna Something To Remember 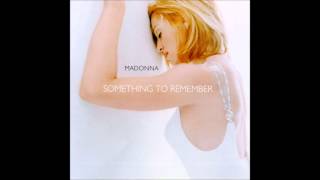 Madonna - Something To Remember (Music Video) 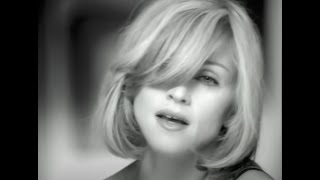 Entertainment Weekly - 11/24/95, p.107
"...By placing her greatest-hit ballads...in a new context--that is, separated from her more attention-getting dance music--Madonna reinvigorates them, which is just what a good best-of compilation is supposed to do..." - Rating: A
Q - 2/96, p.109
4 Stars - Excellent - "...the best thing she has done in many a year..."
Melody Maker - 11/11/95, p.40
"...she's obviously hoping to be remembered as sultry crooner rather than pouting disco queen....the breathless, steam-showered, snogtastic, Massive Attack-accompanied take on Marvin Gaye's 'I Want You' is irrefutably incredible..."

SOMETHING TO REMEMBER is a collection of Madonna's ballads. It includes two new songs, "You'll See" and "One More Chance," and two versions of "I Want You," originally recorded for the Marvin Gaye tribute album INNER CITY BLUES, which was released three weeks earlier.
Personnel includes: Madonna (vocals); Dean Parks (acoustic guitar); Michael Thompson (electric guitar); Suzie Katayama (cello); David Foster, Jan Mullaney (keyboards); Simon Franglen (programming); Massive Attack.
Producers include: Nellee Hooper, Madonna, Patrick Leonard, Babyface, David Foster.
Engineers include: David Reitzas.
Recorded at Chartmaker Studios; Brooklyn Studios. Includes liner notes by Madonna.
Personnel: Dean Parks (acoustic guitar); Michael Hart Thompson , Michael Thompson (electric guitar); Suzie Katayama (cello); Jan Mullaney, David Foster (keyboards); Simon Franglen (Synclavier, programming).
Audio Mixer: Dave Reitzas.
Recording information: Brooklyn Studios; Chartmaker Studios; Los Angeles, CA.
Photographers: Dean Chamberlain; Mario Testino.
Arrangers: Madonna; Rob Mounsey; David Foster.
She can dance and she can jive, and most of the time that's why you buy Madonna records. She's our real-life dancing queen. So if buying an album advertised as her "Greatest Ballad Hits" strikes you as sort of like buying acoustic Abba, you're probably not alone.
But ever since TRUE BLUE, Madonna has displayed a keen interest in pop orchestration and smoky, soulful singing. On the breakthrough "Live To Tell," she discovered the low end of her vocal range, while co-producer and co-writer Patrick Leonard built a psychedelic swell of keyboards, guitars and sound effects around her. It was like nothing she had done before, dealing directly with dark secrets, foreshadowing an adult pop sound that she'd stick by through all the twists, turns and trends that followed. SOMETHING TO REMEMBER collects such slow and mid-tempo tracks from the various nooks in which Madonna's hidden them (though most were singles, many had showed up in album form only on soundtracks), and shows off the dark chanteuse qualities that she has only intermittently gotten credit for.
Notice the almost Beatlesque harmonies and swooping strings of her 1994 hit "Take A Bow," the dream-like feel of the electric piano on the wistful "This Used To Be My Playground," or the epic feel of "Oh Father," which starts with a dance of classical strings before dipping to a soul-baring vocal about the causes and effects of child abuse. The three new songs on SOMETHING TO REMEMBER are formidable additions to this oeuvre. "You'll See," with its Spanish guitar flourishes and lyric about surviving a wrecked affair, is a direct sequel to "Take A Bow." "I Want You," a Marvin Gaye cover that also appears on the Gaye tribute album INNER CITY BLUES, is a stunning collaboration with UK's Massive Attack, taking Madonna into a trippy, spare realm that sounds like dub with strings. And "One More Chance" is, amazingly, almost acoustic Madonna--the dancing queen cast improbably as the strumming princess.

63%off
Madonna
Do You Think I'm Sexy? - Unauthorized
$5.20 Super Savings
Add to Cart