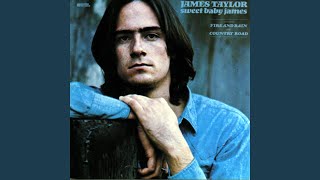 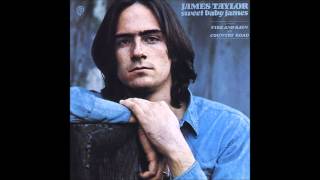 Composer: James Taylor .
Personnel: James Taylor (vocals, guitar); James Taylor ; Randy Meisner, John London, Bob West (bass instrument); Carole King (vocals, piano); Danny Kortchmar (guitar); Red Rhodes (steel guitar); Chris Darrow (violin, fiddle); Jack Bielan (brass); Russ Kunkel (drums).
Recording information: Sunset sound (12/1969).
Photographer: Henry Diltz.
Arranger: Jack Bielan.
Though James Taylor's self-titled debut introduced his mellow melodicism and affecting songcraft, SWEET BABY JAMES was the album that rocketed him to national recognition. With SWEET BABY JAMES, Taylor abandoned the slightly psychedelic structural ambition of his first record (the first side was composed as a suite), and settled fully into the folk and country styles to which he is best suited. The top ten hit "Fire and Rain," for instance, a deeply personal story-song based on the artist's experiences in mental hospitals and the suicide of a friend, is built around Taylor's gentle, understated voice, acoustic guitar, cello, piano, and drums.
The plaintive, melancholic air of "Fire and Rain" resonated with millions of listeners, as did the rest of the album. Taylor's lyrics, which address personal identity, religion, and relationships lost and struggling, are highly confessional, yet associative and lyrical enough to reflect the lives of listeners. At times, he marries the plight of the sensitive soul to the myth of the cowboy in songs like the title track, a kind of campfire lullaby, or to country traditions, as in "Country Road." In all, these elements combine to make SWEET BABY JAMES, arguably, Taylor's definitive statement, and one of the most influential albums in the singer-songwriter genre.