As the countdown begins for the new millennium there is still one number you can always count on.

181K ratings
Currently Out of Stock: We'll get more as soon as possible
Notify Me When Available
Add to Wishlist
Format:  Blu-ray
sku:  6922K
92% recommend us! 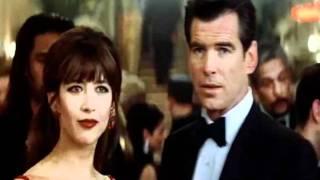 "If you're Q does that make him R'"
- Bond (Pierce Brosnan) to Q (Desmond Llewelyn)
"Titanium armor, a multitasking heads-up display, and six beverage cup holders."
- R (John Cleese) describing the gadgets on Bond's hi-tech car
"Do you want to put that in English for those of us who don't speak spy'"
- Dr. Christmas Jones (Denise Richards) to Bond
"I always wanted to have Christmas in Turkey."
- Bond to Dr. Jones
"I thought Christmas only comes once a year'"
- Bond to Dr. Jones

Complete with ski chases, casino hijinks, high-tech gadgetry, and sultry women, the 19th installment in the James Bond franchise features the increasingly at-ease Pierce Brosnan in his third appearance as 007, in a race to save the world's oil supply. Sophie Marceau (BRAVEHEART) stars as Elektra King, the daughter of a murdered oil tycoon, while Robert Carlyle (THE FULL MONTY) plays one of the most unusual Bond villains ever: Renard, who is unable to feel pain because of a bullet lodged in his brain. Director Michael Apted, known for such films as COAL MINER'S DAUGHTER, was brought in to make the story more dramatic and facilitate the addition of more complex female characters. One of the fruits of Apted's involvement is that M (Judi Dench) gets to move from behind her desk, while curvy Denise Richards (WILD THINGS) gets to show off more than her figure. Dangerous stunt work, exhilarating action sequences, and a rousing theme song from alternative rock band Garbage make this a worthy addition to the 007 series. The film also marks the 17th and final appearance of Desmond Llewelyn as Q; John Cleese is introduced as Q's successor, R.

Bond (Pierce Brosnan) must race to defuse an international power struggle with the world's oil supply hanging in the balance. Sophie Marceau is the sultry Elektra King, the daughter of a murdered oil tycoon whom Bond is assigned to protect. Robert Carlyle steps into the villain role of Renard, who can feel no pain, and Denise Richards is nuclear weapons expert Dr. Christmas Jones; John Cleese and Judi Dench also star. This installment is directed by Briton Michael Apted (GORILLAS IN THE MIST).