What is the secret of Soylent Green? 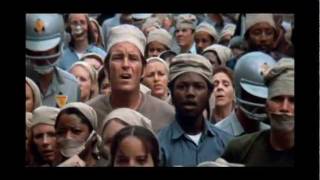 21st century New York City is (still) an overpopulated mess, and the only food left is Soylent Green, a soybean and lentil concoction with an extra-special, government-mandated ingredient. As police detective Thorn (Charlton Heston) investigates a murder, he learns of a conspiracy with bizarre implications. This Edward G. Robinson's final movie, as the star died not long after filming his final scene. Based on Harry Harrison's "Make Room! Make Room!"

A nightmarish vision of the future set in New York City circa the year 2022. The population has swelled to 40 million and the environment is so ravaged by pollution that a synthetic food known as Soylent Green is the only kind available. When the director of the giant corporation that manufactures this food supply is murdered, the detective investigating the case gradually discovers the horrifying truth about Soylent Green's secret ingredient.

17%off
Colossus: The Forbin Project
$12.50 Super Savings
Add to Cart