Carpenters As Time Goes By

Products with a similar style:
Linda Ronstadt (CD) $13
92% recommend us! 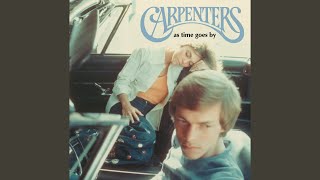 The Carpenters: Karen Carpenter, Richard Carpenter.
Additional personnel: Ella Fitzgerald, Perry Como, John Davidson.
Personnel: Karen Carpenter (vocals, drums, background vocals); Ella Fitzgerald, O.K. Chorale, Perry Como (vocals); Timothy May (guitar, banjo, mandolin); Tony Peluso (electric guitar); Sheridon Stokes (flute, recorder); Bob Messenger (flute); Tommy Morgan (harmonica); Doug Strawn (clarinet); Earl Dumler (oboe, English horn); Tom Scott (tenor saxophone); Jack Nimitz (baritone saxophone); Buddy Childers (flugelhorn); Pete Jolly (keyboards); Cubby O'Brien, Harvey Mason, Sr. , Ron Tutt (drums).
Audio Mixers: Dave Iveland; John Hendrickson; Karen Carpenter.
Recording information: A&M Studios, Hollywood, CA; Capitol Studios, Hollywood, CA.
Arrangers: Robert Van Epps; Bobby Hammack; Nelson Riddle; Paul Riser.
The trademark sound that made the Carpenters one of the highest charting and most beloved pop acts of the 1970s is in full effect on this collection of outtakes, demos, and live performances. The quirky compilation is threaded together by infectious melodic hooks, Karen Carpenter's evocative alto, and her brother Richard's clean, lush arrangements, all of which sound as crisp and appealing as they did in their heyday.
Excerpts from the Carpenters television specials are a key inclusion here. A medley of the CLOSE ENCOUNTERS and STAR WARS movie themes, covers of "I Got Rhythm" and "You're Just in Love," and a stylized version of the 1929 standard "Without a Song" are just a few of the rarities. AS TIME GOES BY also features other pop and rock covers ("Nowhere Man," "Dancing in the Street") that are placed alongside technical experiments (a double-tracked duet between Ella Fitzgerald and Karen Carpenter). For good measure, this disc includes medleys of the Carpenters' own hits (one blends slow versions of "Superstar" and "Rainy Days and Mondays"). Even on these truncated renditions, Karen's voice pushes all the right vocal buttons and pulls the heartstrings. AS TIME GOES BY will please fans of the band's sound, and is an especially welcome treat for the world's Carpenterphiles.

Customer Rating:
Based on 81 ratings.


I've had this cd a while and next to Close to You album, it is my very fave! I love all the medleys, but especially the "You're Just in Love". For many this will be a favorite album especially for us who can recall the tv specials. There aren't any tv specials like was done often back then so that makes it extra special to me.

New
Kenny Rogers / Dolly Parton
Once Upon A Christmas (CD)
$7.30
Add to Cart