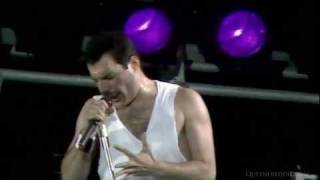 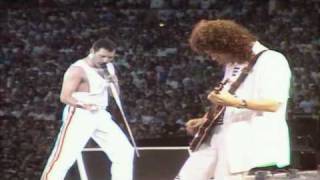 The 2003 edition of LIVE AT WEMBLEY contains bonus tracks.
Queen: Freddie Mercury, Brian May, John Deacon, Roger Taylor.
Additional personnel: Spike Edney (guitar, keyboards, background vocals).
Recorded live at Wembley Stadium, London, England and Nepstadion, Budapest, Hungary in 1986.
Personnel: Spike Edney (keyboards).
Audio Mixer: Brian Malouf.
Audio Remasterer: Kevin Metcalfe.
Recording information: Nepstadion, Budapest, Hungary (1986); Wembley Stadium (1986).
Illustrator: Roger Chiasson.
Photographers: Neal Preston; Torleif Svensson; Denis O'Regan.
Arranger: Brian May.
Originally issued just a few months after Freddie Mercury's untimely death, LIVE AT WEMBLEY '86 is two discs full of Queen at the height of its powers in concert. Perfectly blending popular hits with more obscure album tracks and several vintage 1950s rock & roll covers, WEMBLEY '86 is everything a Queen fan could possibly want from an in-concert release. Recorded at England's massive Wembley Stadium during a stop on their sold-out A KIND OF MAGIC summer tour, the band is heard giving it their all in front of over 150,000 fans during a two-night stand.
LIVE AT WEMBLEY '86 proves to be a very consistent set, a worthy successor to Queen's previous double live album, 1979's LIVE KILLERS. All of the band's classic '70s material--"Tie Your Mother Down," "We Will Rock You/We Are the Champions," "Bohemian Rhapsody"--is performed with just as much vigor as their newer cuts--"One Vision," "A Kind of Magic," "Under Pressure," "Another One Bites the Dust." And it's a gas to hear Queen have some fun with spirited renditions of '50s standards--"Tutti Frutti," "(You're So Square) Baby I Don't Care," and "Hello Mary Lou (Goodbye Heart)."

26%off
Queen
News Of The World In Concert
$14 Discontinued