U2 Wide Awake In America 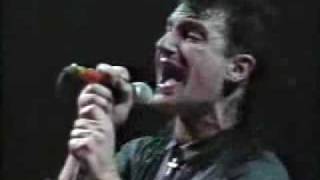 This includes live recordings and out-takes from the "Unforgettable Fire" tour and album, 1984-85.
U2: Bono (vocals); Dave "The Edge" Evans (vocals, guitar, keyboards); Adam Clayton (bass); Larry Mullen, Jr. (drums).
Producers: Tony Visconti, U2, Brian Eno, Daniel Lanois.
Engineers include: Kevin Killen, Ron St. Germain, Paul Thomas.
Audio Mixers: Kevin Moloney; U2.
Photographer: Matt Mahurin.
Put together as a follow-up to the phenomenally successful THE UNFORGETTABLE FIRE, the EP WIDE AWAKE IN AMERICA captures two of that album's finest cuts as recorded live. While the studio version of "Bad" displayed U2's trademark whisper-to-a-scream structure, the slow burn is extended even further in the live arena. "A Sort Of Homecoming" is given the same over-the-top dramatic treatment. Throughout, Bono soars, evoking a drama of near-biblical proportions atop the studied, controlled intricacies of the Edge's effect-laden soundscapes. As a bonus, the EP includes two previously unreleased tracks from THE UNFORGETTABLE FIRE sessions ("Three Sunrises" and the rootsier "Love Comes Tumbling"), breathing new life into what was already a classic rock album.