Bad Men... Bad Ladies... Bad Horses... OUt trouble-shooting sheriff always put his finger on it (or in it). No wonder they call him the FASTEST FINGER IN THE WEST 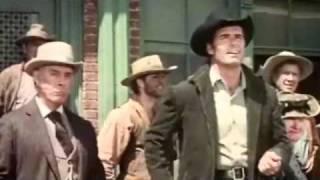 Director Burt Kennedy's Western is a bawdy, all-out parody that skewers every cliché the genre has to offer. There's Jason McCullough (James Garner), the sharpshooting stranger passing through town who becomes sheriff; the Danbys, a villainous gang who terrorizes the entire community; Prudy Perkins (Joan Hackett), the lily white maiden who wants to marry the sheriff; and the local drunk (the great Jack Elam) whom McCullough appoints as his deputy. Although McCullough manages to arrest Joe Danby (Bruce Dern), the rest of the Danby gang is set on busting him out of prison. Garner is utterly charming as the earnest hero of this entertaining tale, cool and calm as a cucumber; don't miss the scene in which he first imprisons Joe Danby in a cell without bars.

In this wonderful spoof of Western films, a sharpshooting drifter wanders into a lawless mining town and takes the thankless job of sheriff.

Paint Your Wagon
$10
Add to Cart