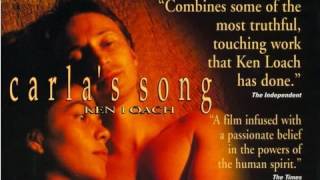 Paul Laverty drew on his experiences as a lawyer working with human rights groups in Nicaragua in writing the script for CARLA'S SONG, which stars Robert Carlyle (TRAINSPOTTING) as George, a Glasgow bus driver. Attracted to Carla (Oyanka Cabezas), a beautiful but impoverished Nicaraguan woman who often rides his bus, he sometimes allows her to ride for free--and is fired as a result. But he keeps in touch with Carla, helping her find a place to live in a spare room of a friend's apartment after learning that she's become detached from a dance troupe, forcing her to dance in the streets of Glasgow for meager remuneration. As they continue to see each other, George finds that Carla is subject to drastic mood swings, a result of her Sandinista boyfriend, Antonio (Richard Loza), having been captured by the Contras. Realizing that nothing will be resolved until Carla discovers the truth about Antonio, George agrees to accompany her to Nicaragua to try to find him. Carlyle is typically excellent in this film by hard-hitting English filmmaker Ken Loach, who is known for casting an unswerving eye on complex political and human rights issues.

The versatile Robert Carlyle (TRAINSPOTTING, THE FULL MONTY) stars as George, a Glasgow bus driver who risks his job by giving a free ride to a beautiful, poor Nicaraguan woman. As her helps her cope with her past, and the personal toll exacted on her by human rights abuses in her homeland, he also discovers more about himself in the process. CARLA'S SONG is another fine work of social realism from director Ken Loach (RAINING STONES).

Midnite Movies: Planet of the Vampires (DVD)
$15.98 on Sale
Add to Cart