Wherever, whatever, have a nice day. 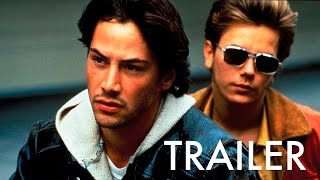 A narcoleptic, psychologically-scarred young man who peddles his body, and his best friend, who also works the streets though he's from a wealthy political family, wander together and apart, from Seattle to as far away as Italy. A loose reworking of Shakespeare's "Henry IV," with Reeves as the prodigal son who slums in the Pacific Northwest's junkie lowlife milieu.

Semi-documentary footage of Seattle street hustling mixes with highly theatrical Shakespearean speech in this very loose adaptation of "Henry IV." In Seattle, Mike, a male prostitute and narcoleptic, meets Scott, who is rebelling against his wealthy family by working the streets. The two decide to embark on a search for Mike's long-lost mother, and their journey leads them first to Mike's home in Idaho and then to Italy.