3.8K ratings
Currently Out of Stock: We'll get more as soon as possible
Notify Me When Available
Add to Wishlist
Format:  DVD
item number:  695EF
92% recommend us! 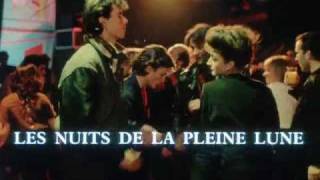 In Eric Rohmer's A FULL MOON IN PARIS, Louise (Pascale Ogier) is a tiny woman with the weepiest eyes and the most voluminous 1980s hairstyle that has ever hit the French big screen. She is bored of her reliable relationship with her faithful, disciplined boyfriend, Rémi (Tchéky Karyo), but she's not sure that she's ready to leave him. She moves her belongings out of their shared apartment in the suburbs and moves into an adorable studio apartment in the heart of Paris. Louise tells Rémi that she will spend the weekdays in her little apartment, simply so that she can have some time to herself. In reality, however, she wants to go out and party. Constantly pursued by her horny, married friend, Octave (Fabrice Luchini), Louise prefers to go to parties where she dirty dances with a lanky greaser named Bastien (Christian Vadim). Eventually Louise realizes that she simply cannot have her cake and eat it too. That is when Rohmer's classic style kicks in and the film changes over into long existential conversations, harrowing expressions of loneliness, and heartbreaking sincerity. A FULL MOON IN PARIS is one of five films in Eric Rohmer's Comedies and Proverbs series, and is based on the proverb, "He who has two women loses his spirit. He who has two houses loses his mind."

16%off
The Flintstones
$8.40 Super Savings
Add to Cart