What are you capable of? 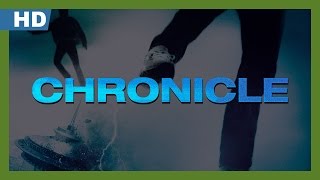 Movieline - 02/03/2012
"CHRONICLE fits into the growing genre of 'found footage' films, though that becomes just one formal element of many director Josh Trank meshes together to put a new spin on the subject of teenage alienation and its more extreme social side effects."
USA Today - 02/03/2012
3 stars out of 4 -- "Bolstered by the natural performances of a trio of little-known actors, the very watchable CHRONICLE keeps us captive throughout."
Los Angeles Times - 02/03/2012
"[T]he three teens are a well blended crew, anchored by DeHaan, who strip mines the trajectory of teen repression, resentment and rage with a frenetic energy."
Chicago Sun-Times - 02/03/2012
3.5 stars out of 4 -- "It's their convincing acting and Landis' dialogue -- not just the late drama but the early goofing around -- that gives the movie a natural authenticity."
Hollywood Reporter - 02/02/2012
"CHRONICLE is a quite clever boys-gone-wild-on-telekinetic-powers fantasy. Unquestionably endowed with the best special effects ever in a low-budget shaky-cam movie..."
A.V. Club - 02/02/2012
"[T]here’s an offhand magic to the way home video can handle big special effects, making CHRONICLE seem less like a movie than like the fantastical abruptly, artlessly colliding with the real world." -- Grade: B+
Entertainment Weekly - 02/17/2012
"[T]his is the most original and excitingly executed wow-factor-meets-handheld video feature since BLAIR WITCH itself. It's also a film that rebuilds the power of special effects from the ground up." -- Grade: A-
Total Film - 04/01/2012
5 stars out of 5 -- "[I]t honours comic-book conventions by proving their adaptability to new contexts. Natural-but-vivid performances, class rage and darkening philosophical notions plumb depths and reel us in."
Sight and Sound - 04/01/2012
"CHRONICLE's tight focus on Andrew's psyche....A growing sense of unease develops naturally and believably as he loses control..."

A loner (Dane DeHaan) escapes his abusive home life and discovers a mysterious crater that gives him and two fellow high school students psychokinetic powers in this found-footage-style superhero film from director Josh Trank and screenwriter Max Landis. DeHaan plays Andrew, a angsty teen whose mother is dying and whose father takes out his violent frustrations out on the boy. As a result, Andrew starts filming everything around him, including the dreadful night that he, his cousin Matt (Alex Russell) and the soon-to-be senior class president, Steve (Michael B. Jordan), wake up with superpowers after exploring a condemned piece of land housing an unexplained power source. The three bond over their newfound abilities, with Andrew clearly leading the pack in terms of control and strength. Despite their noble intentions, a darker streak appears in one of them as the other two try to take control over a situation that soon spirals into homicidal madness -- all of which is captured on camera.