A Fistful of Dollars R

In his own way he is perhaps, the most dangerous man who ever lived! 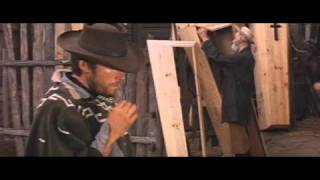 Clint Eastwood's legendary "Man with No Name" makes his powerful debut in this thrilling, action-packed "new breed of western" (Motion Picture Herald) from the acclaimed director of The Good, the Bad, and the Ugly and For a Few Dollars More. Exploding with blistering shoot-outs, dynamic performances and atmospheric cinematography, it's an undisputed classic of the genre.

A mysterious gunman (Eastwood) has just arrived in San Miguel, a grim, dusty border town where two rival bands of smugglers are terrorizing the impoverished citizens. A master of the "quick-draw," the stranger soon receives offers of employment from each gang. But his loyalty cannot be bought; he accepts both jobs...and sets in motion a plan to destroy both groups of criminals, pitting one against the other in a series of brilliantly orchestrated set-ups, showdowns and deadly confrontations.

The first true Spaghetti Western follows the exploits of a nameless drifter (Clint Eastwood) who wanders into a town torn apart by greed, corruption, and revenge. The clever, tough-talking gunslinger then plays the town's two feuding families off each other to his own benefit. As members of each family are planted in the ground, the gold in his pockets gets heavier and heavier.

This violent remake of Akira Kurosawa's YOJIMBO made Eastwood a star, and sparked two sequels--FOR A FEW DOLLARS MORE and THE GOOD, THE BAD AND THE UGLY--to form what is now referred to as the Man with No Name trilogy. All three films starred Eastwood, featured Ennio Morricone's distinctive musical compositions, and were directed--in a wonderfully gritty style--by Sergio Leone. Although the film was not released in the United States until 1967, it was produced and released internationally in 1964.

52%off
Desperado (The Superbit Collection)
$7.18 Spring Sale
Add to Cart