The Hitchhiker's Guide to the Galaxy PG

Don't leave Earth without it 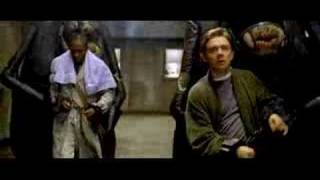 Douglas Adams's long-awaited film version of THE HITCHHIKER'S GUIDE TO THE GALAXY, based on his five-book series, is a funny, wacky, highly creative ride through a bizarre universe. Martin Freeman (Tim from THE OFFICE) stars as Arthur Dent, a British everyman suddenly thrust into intergalactic intrigue when the earth is destroyed by the Vogons to make room for an interspatial highway. Arthur travels the skyways with good friend Ford Prefect (Mos Def), an alien writer for an electronic encyclopedia called THE HITCHHIKER'S GUIDE TO THE GALAXY. Things get downright dangerous--and absolutely hysterical--when Arthur and Ford thumb a ride with the president of the universe, two-headed Zaphod Beeblebrox (a wild and crazy Sam Rockwell); earthling Tricia McMillan (Zooey Deschanel), whom Arthur once had a thing for back in England; and a perpetually depressed robot named Marvin (voiced by Alan Rickman, played by Warwick Davis). With much of the galaxy after them, the motley crew makes its way toward a super-computer that just might be able to provide them with the ultimate question; they already know the answer. Based on a second-draft script written by Adams himself, who died shortly thereafter, H2G2 is a winning film that rightfully earns its place in the storied HITCHHIKER'S lore. And for an extra little bonus, make sure to sit through all of the credits.

The Hitchhiker's Guide to the Galaxy (3-DVD)
$18.70 Super Savings
Add to Cart