Free-spirited Danny becomes a man of property, the heir to two modest houses and a watch from his grandfather. Not a worthwhile inheritance, but to newly arrived cannery worker Sweets he's worthwhile...and marriageable. 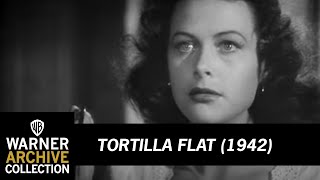 Pilon, Danny, the Pirate -- paisanos all -- live a free-spirited life near seaside Monterey. Then Danny becomes a man of property, the heir to two modest houses and a watch from his grandfather. Too bad that inheritance isn't something worthwhile, like wine or money. But a gorgeous, newly arrived cannery worker named Sweets thinks a man of property may himself be worthwhile...and marriageable.

Based on the classic novel by John Steinbeck, this ensemble dramedy tells the affectionate story of a group of misfits whose loyalties are tested by monetary and romantic rivalries. Spencer Tracy plays Pilon, the head of a motley crew in search of their next free meal. When buddy Danny (John Garfield) comes into an inheritance, Pilon is tempted to steal his money while Danny desires to marry Sweets Ramirez (Hedy Lamarr), whom Pilon is sweet upon himself. Both Pilon and Danny must make sacrifices to preserve their friendship and vagabond way of life.

Northern California provides the backdrop for this freewheeling John Steinbeck tale about a gaggle of reckless-but-lovable hobos and their seriocomic attempts at conformity. These derelicts of primarily Spanish lineage eat, drink, filch, wander, and sleep outdoors. Led by the philosophically errant Pilon (Spencer Tracy), they are unified by a mutual disdain for work. Pilon's sidekick, Danny (John Garfield), disrupts their bohemian subculture when he inherits two houses, plans to wed Dolores "Sweets" Ramirez (Hedy Lamarr), and otherwise threatens to cast a ray of respectability and security on these misfits. Pilon, who is after the same girl, considers stealing Danny's money until Danny becomes injured in a drunken brawl, forcing the two to reevaluate their lives--and their friendship. Garfield, Lamarr, and Tracy all turn in darling performances as director Victor Fleming (GONE WITH THE WIND, THE WIZARD OF OZ) guides these lovable characters through rivalries and envy to marriage and happiness.