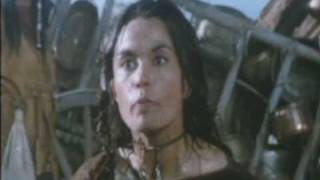 Bill Tyler (Charlton Heston) and Henry Frapp (Brian Keith), two aging beaver trappers in the high Rockies, find their lives on the line when they encounter Running Moon (Victoria Racimo), a beautiful Blackfoot runaway. Though Tyler wants no part of her, she takes him as her own--which angers her true mate, Heavy Eagle (Steven Macht), the powerful local Blackfoot chief. Beautiful photography is one of the highlights of this offbeat mixture of action, adventure, and comedy, which features a script by Charlton Heston's son, Fraser Clarke Heston.

In this action-packed Western, two aging trappers battle it out with Indians.
Bill Tyler and Henry Frapp are experienced mountain men who often confront Native Americans while searching for fur in the wilderness. But they haven't yet gone up against an Indian leader quite as determined and vicious as Heavy Eagle.
The mountaineers earn his wrath when they come to the aid of his pretty female mate, Running Moon, who has run away. Although Bill and Henry are excellent fighters, Heavy Eagle will do just about anything to get her back.
Do the trappers have what it takes to defeat the army of Indians out for their blood'