The true story of an American ninja. 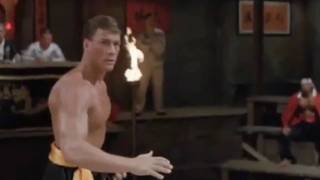 Based on a true story, this martial arts adventure takes place behind the Hong Kong walls for the secret competition that settles the World Championship of the sport. While trying to be knocked down inside the ring, government agents try to track the master down outside the ring.

This film is based on events in the life of Frank Dux, an American who sought to become the champion of a secret, dangerous, martial arts contest called Kumite. While Dux searches through the streets of Hong Kong for the underground arena where the event is being held, he must outfox U.S. agents who want him to work for the government instead of entering the competition. The exciting climax of the film is the Kumite itself, when Dux faces the imposing, undefeated Chong Li -- who's not above cheating....