In the heart of suburbia, a hit man with heart has just moved in.

Currently Out of Stock: We'll get more as soon as possible
Notify Me When Available
Add to Wishlist
Format:  DVD
sku:  XRI 83812D
Also released as:
The Whole Nine Yards (Blu-ray) for $23.50
91% recommend us! 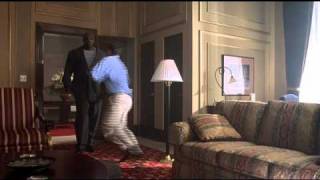 A mob comedy in which ex-mobster Jimmy "The Tulip" Tudeski (Willis), who's now living in Canada as part of the Witness Protection Program, becomes a target yet again, much to his dismay. All of this is because of the couple next door--more specifically, his neighbor's greedy wife, Sophie (Arquette). When Sophie learns of Jimmy's true identity, she sends her befuddled husband Nicholas (Perry) to Chicago to track down the mob and inform them of Jimmy's whereabouts, expecting a fruitful reward in return. From there, events spiral even further out of control.

Nicholas "Oz" Oseransky (Perry) is a dentist in suburban Montreal stuck in a loveless marriage to Sophie (Arquette). One day a new neighbor moves in next door, and Oz recognizes notorious Chicago hitman Jimmy "The Tulip" Tudesky (Willis), hiding out from the Chicago mobsters that he ratted on. Sophie suggests to Oz that he tell mob boss Yanni Gogolack (Pollak) about their new neighbor in order to collect a bounty, so that she can stay behind to plot Oz's death and collect insurance money. In Chicago Oz is forced by large hitman Frankie Figs (Duncan) to reveal what he knows about Jimmy's whereabouts, while falling in love with Jimmy's ex-wife Cynthia (Henstridge). The double-crosses mount, with Oz forming a nervous friendship with Jimmy while trying to avoid being killed. Meanwhile Oz's dental assistant Jill (Peet) eagerly learns the tricks of the hitman trade from Jimmy, while government agents try to bust the whole gang. Oz has to juggle the hitmen, the Feds, and his own shrewish wife while hoping for happiness with Cynthia. A rowdy mob comedy featuring a cool, controlled performance by Willis and lots of manic slapstick from "Friends" star Perry.

The Most Wonderful Time of the Year (DVD)
$6.20 Super Savings
Add to Cart

Analyze That
$5
Add to Cart