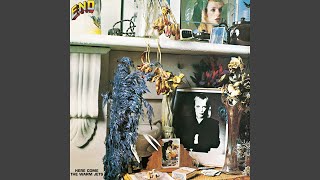 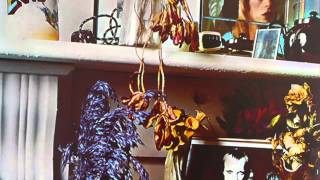 Some Of Them Are Old - Brian Eno (Music Video)

Rolling Stone - p.92
5 stars out of 5 - "Eno, guitarist Robert Fripp and moonlighting members of Roxy Music reconstitute rock and pop into some bizarre third thing."
Uncut - p.102
5 stars out of 5 - "[T]he first fractured flush of Eno's freedom from a Roxy he feared fatally compromised..."
Magnet - p.91
"WARM JETS orbits in the same glam-rock galaxy as Bowie's ZIGGY STARDUST..."
Mojo (Publisher) - p.123
4 stars out of 5 - "Eno's debut really does sound like the future."
Pitchfork (Website) - "His first solo album, 1974's HERE COME THE WARM JETS, lunges out of its gates with the gigantic tone-bending riff of 'Needles in the Camel's Eye.' It's a startlingly simple song..."

Personnel: Brian Eno (vocals, keyboards, synthesizer); David Hill (electronics).
Audio Mixers: Chris Thomas ; Denny Bridges; Paul Hardiman; Philip Chapman; Brian Eno.
Recording information: 09/1973.
By the time Brian Eno left Roxy Music and came to record this masterpiece of a debut in 1973, he already held in his grasp the raw tools to revolutionize popular music. HERE COME THE WARM JETS is bathed in his singular pop-with-a-wink aesthetic and free-associative imagination. Whether on the four-on-the-floor pre-punk stomp of "Needles In The Camel's Eye" or the Spector/VU trad-rock-ism of "Cindy Tells Me," the album displays an unabashed love of quirky, catchy pop. Macabre lyrics often subvert the melodies, a feature fully expressed on "Baby's On Fire," where the singer's cheeky vocals exaggerate the theme's comic ambiguity.
On two quite different pieces--the closing title-track and "On Some Faraway Beach"--a different side of Eno was laid bare. These mid-tempo, mostly wordless sound-paintings construct melancholy scenes out of grandiose, manipulated sounds, and gesture toward Eno's role as the father of ambient music. Savage guitar lines, erratic synthesizer, and pounding drums (Robert Fripp, Paul Thompson, and Phil Manzanera are among the excellent personnel) provide exciting textures on a collection as beguiling as it is invigorating. With WARM JETS Eno proved he was ready to jump off the edge of the pop universe, and to drag everyone else with him.