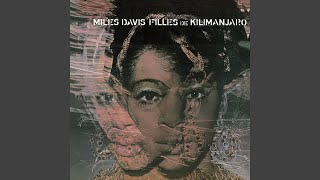 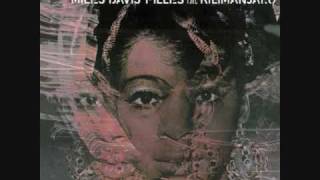 Personnel: Miles Davis (trumpet); Wayne Shorter (tenor saxophone); Herbie Hancock, Chick Corea (electric piano); Dave Holland (bass); Ron Carter (electric bass); Tony Williams (drums).
Recorded at Columbia Studios, New York, New York between June 21 and September 24, 1968. Originally released on Columbia (9750). Includes liner notes by Ralph J. Gleason and Lawrence Kart.
All tracks have been digitally remastered.
FILLES DE KILIMANJARO is one of the most singular, compelling works in the entire Miles Davis discography. It marks the continental divide between the trumpeter's classic '60s quintet, and the furious period of experimentation which led to BITCHES BREW, ON THE CORNER and AGARTHA.
By 1968, Miles was feeling creatively restless, and stalwarts Herbie Hancock and Ron Carter were preparing to leave (to be replaced by Chick Corea and Dave Holland). So FILLES DE KILIMANJARO is a transitional work, suffused in the heady abstraction of the '60s, but with an ear out for the blues tonalities, electronic textures, and dancing rhythms of the jazz-rock epoch to come. Nevertheless, FILLES is neither avant-garde jazz nor fusion; it occupies a space of its own aural design--a magnificent new direction in music.
Miles' fascination with the Fender/Rhodes electric piano, and its potential for new chordal voicings, is at the heart of FILLES DE KILIMANJARO. Herbie Hancock treats it percussively on the relentlessly driving "Frelon Brun," and with bell-like elan on the winsome title tune. Corea, meanwhile, feeds the horns guitar-like strums on the edgy, martial "Petits Machins," and bluesy washes of sound on the eerie "Mademoiselle Mabry." Bassists Carter and Holland find new harmonic possibilities within their vamp-like structures, freeing Tony Williams to engage Davis and Shorter in some remarkable airborne conversations: From the "All Blues"/James Brown references on "Toot De Suite" to the free-form mystery of "Mademoiselle Mabry" where all the strong rhythmic beats are air-brushed away, the trumpet and tenor saxophone are allowed to create sophisticated new forms of phrasing.

Miles Davis
On The Corner
$7.70 CD Sale
Add to Cart

Mahavishnu Orchestra
Visions of The Emerald Beyond (CD)
$6.97 CD Sale
Add to Cart