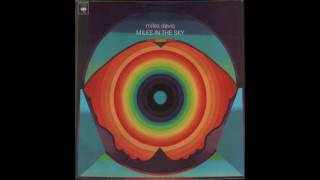 Down Beat - 10/3/68
4.5 stars - Very Good Plus - "...[MILES IN THE SKY], one of the best [recordings] that Miles has made with his present group, shows the effect of the Coleman-Coltrane revolution even as Miles denies it, for their assault on the popular song has pushed Miles along the only path that seems open to him, an increasingly ironic detachment from sentiment and prettiness...."

Personnel: Miles Davis (trumpet); Wayne Shorter (tenor saxophone); Herbie Hancock (acoustic & electric pianos); George Benson (guitar); Ron Carter (bass); Tony Williams (drums).
Producer: Teo Macero.
Reissue producers: Michael Cuscuna, Bob Belden.
Recorded at Columbia Studio B, New York, New York on January 16 and from May 15-17, 1968. Originally released on Columbia (9628). Includes liner notes by Bob Belden.
Digitally remastered using 20-bit technology by Mark Wilder and Rob Schwarz (Sony Music Studios, New York, New York).
This is part of Sony's Columbia Jazz Masterpieces series.
With MILES IN THE SKY, Davis began to consciously incorporate elements of popular music and blues into the quintet's open-ended style of group improvisation. This was an attempt to reach out, not sell out. By 1968, groups such as the Beatles had stretched the parameters of the pop song form way beyond their humble harmonic beginnings, while the blues trio Cream significantly elevated the level of musicianship and added a bold improvisational dimension to live performances.
It was impossible to ignore these developments. And as Miles indicated in his autobiography, he was already becoming enamored of musicians such as Jimi Hendrix, James Brown, Sly Stone and Muddy Waters (elements of soul jazz had already crept into the quintet's repertoire with "Eighty-One" from E.S.P.).
On MILES FROM THE SKY, the trumpeter's "Stuff" juxtaposes a long elliptical blues line over a harmonically varied Ron Carter bass vamp, as Herbie Hancock pumps out billowy turqoise clouds of Fender/Rhodes chords and Tony Williams alternatingly locks in and deconstructs the eighth note pulse. On Shorter's "Paraphernalia" the horns play harmonic cat and mouse with a swinging vamp, resolving tension in cyclical chord progression, as George Benson's electric guitar offers a teasing suggestion of things to come. Tony Williams' "Black Comedy" and Davis' "Country Son" offer a series of radical tempo and textural changes: The former does so in a, more or less, straight ahead groove, while the latter intersperses swing beats with abstract gospel and ballad moods, culminating in an epic Shorter solo, and a Davis solo which hints at the newer style of phrasing he'd reveal on IN A SILENT WAY.

Miles Davis
On The Corner
$7.70 CD Sale
Add to Cart