The Phantom of the Opera PG-13 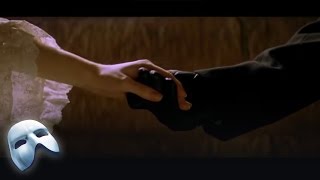 Those who thought that smoke machines and cobwebbed candelabras were the stuff of Halloween parties and dance clubs need to think again. In Joel Schumacher's film adaptation of Andrew Lloyd Webber's Broadway musical THE PHANTOM OF THE OPERA, these moody set devices--and countless others--make every scene an atmospheric vision of souped-up 19th-century Gothic bliss. Christine Daee (a luminescent Emmy Rossum) is a tortured young star who is haunted by the voice of the phantom (Gerard Butler--who also played the lead in DRACULA 2000), a musician who hides in the shadows to hide a facial disfigurement, yet sings to her obsessively. Dwelling in the dark, damp chambers beneath the Paris opera house, the phantom lords over the cast and management with artistic autocracy--he writes the shows, casts them, and threatens all who disobey his plans with dramatically violent outbursts. But when his young student Christine falls for the rich and dapper Raoul (Patrick Wilson), the phantom descends into madness. Webber's memorable songs are performed with aplomb by Rossum, whose background includes singing with the Metropolitan Opera, and Wilson and Butler provide ample accompaniment. One of the treats of the proceedings is Minnie Driver's deeply exaggerated portrayal of the jealous diva, giving this PHANTOM a very appropriate dose of comic relief.

Musical Drama based on Andrew Lloyd Webber's celebrated musical phenomenon. The Phantom of the Opera tells the story of a disfigured musical genius (Gerard Butler) who haunts the catacombs beneath the Paris Opera, waging a reign of terror over its occupants. When he falls fatally in love with the lovely Christine (Emmy Rossum), the Phantom devotes himself to creating a new star for the Opera, exerting a strange sense of control over the young soprano as he nurtures her extraordinary talents.

Phantom of the Opera at the Royal Albert Hall
$13.30 Super Savings
Add to Cart

25%off
Andrew Lloyd Webber
The Phantom of the Opera [Original Motion Picture...
$11.98 on Sale
Add to Cart