Jan-Gel, The Beast From The East / The Beast Returns
Alpha New Cinema (series)

A double feature starring Conrad Brooks (star of Ed Wood's "Plan 9 From Outer Space" and "Glen or Glenda"), the Cecil B. Demille of bad movies. 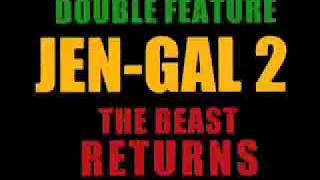 "Conrad Brooks is the Gielgud of bad movies." -- The New York Times

A 50,000 year-old monster caveman, Jan-Gel, is thawed from its icy Arctic grave and stalks the residents of backwoods West Virginia! With a belly as large as his unearthly appetite, the hideous creature roams the countryside, emitting a blood-curdling cry that heralds death, doom and destruction. A teenage girl is kidnapped by the monster and the locals fear the beast may have something other than murder on its mind! Conrad Brooks may be the only man that can save her. In The Beast Returns, Conrad is back on the trail of the elusive beast, who seems to defy death. Jan-Gel takes refuge with a band of gypsies who use the creature to aid in their robbery spree.

Filmed on home-video equipment, the Jan-Gel films are a loving tribute to the legendary Edward D. Wood, Jr. Conrad Brooks, a player in Wood's stock company, appeared in Plan 9 From Outer Space, Jail Bait and Glen or Glenda? Brooks takes on the Jan-Gel project as writer, director and producer with the same gusto and enthusiasm as Wood himself.

50,000 years spent sleeping is likely to give even the most peaceful of snoozers a hangover, but when Jan-Gel (Dale Cluckey) awakes from his slumber, he's hell-bent on turning some disturbingly violent dreams into a reality. Stalking the beautiful landscape surrounding West Virginia, Jan-Gel devastates the local community with a series of grizzly murders. But two agents are hot on his trail, determined to bring down the former cave-dweller, and restore some peace and quiet to the countryside. As Jan-Gel continues his romp he manages to show his tender side among the bloodshed, by falling head-over-heels in love with local belle Beth Simmons! Low budget, guerilla filmmaking at its finest, JAN-GEL: BEAST FROM THE EAST VOL 1&2 harks back to a forgotten era of cheaply made horror flicks, making this a fun and scary endeavor from resourceful director Conrad Brooks.