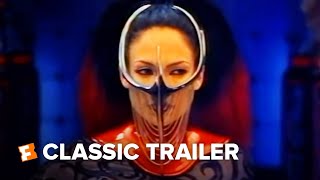 A wild ride inside the mind of a serial killer, THE CELL is a movie that leads viewers on a strange visual and psychological journey. Catherine Deane (Jennifer Lopez) is a child therapist working on an experimental new technology that allows for direct access into someone else's mind. However, the benefits of the technology are still unproven. Meanwhile FBI Agent Peter Novak (Vince Vaughn) is hard at work tracking down a serial killer who encloses women in a small glass cell and drowns them. Novak is able to identify the killer as Carl Stargher (Vincent D'Onofrio), but before he can be arrested, he goes into a coma. The only way to rescue his most recent victim is for Catherine to enter his mind using the experimental technology. However, Stargher's mind is so warped and frightening, there's no way to know what Deane will encounter inside of it. THE CELL is the feature film debut of Tarsem Singh, a renowned commercial and video director who overloads his film with visual splendor and horror, while sticking to a simple story of innocence lost and innocent victims saved. A must-see for fans of dark psychological thrillers, THE CELL features some controversial violence and sexual content along with amazing special effects. A chilling yet strangely elegant thriller, THE CELL is a stunning cinematic experience.