A group of strangers travel to the mysterious Fog Island where a will is to be read at midnight! Only their wits will save them from creepy mad doctors and prehistoric beasts! 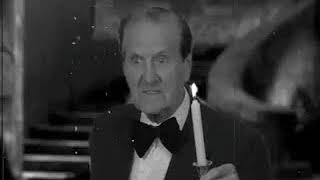 The lovely and innocent Mary Ankers has been named a beneficiary in the will of a mysterious stranger, but to claim the money Mary must travel to the mysterious Fog Island where the will is to be read at midnight! Aboard the S.S. Enterprise, en route to Fog Island, Mary meets Madame Ouspenskaya, Count Vega, Edna Oliver and the handsome Grant Gardner. They too have been named in the will. Luckily Mary has sassy star reporter Roz Darrow and photographer "Ace" Zucco along to watch over her. Roz and Ace soon find their destiny colliding with that of P.I. Mike Flanigan, who is helping famed detective Mr. Wong. Flanigan and Wong are investigating a murder that occurred in the office of Merian C. Cooper on the RKO movie lot. Flanigan's gut tells him there is something sinister about the will and accompanies Roz, Mary and Ace to Fog Island. On the island they meet creepy doctors Armand and Vitus Tesla and their grim staff who have evil plans for Miss Mary. Can Mike Flanigan and Grant Gardner protect her from the Terror in the Tropics?

Inspired by film noir tribute Dead Men Don't Wear Plaid, writer/director A. Susan Svehla uses footage and dialogue from Poverty Row classics starring Bela Lugosi, Boris Karloff and Lon Chaney, Jr. to create a completely new film, albeit a homage to Monogram, PRC and Chesterfield. Although filmed in 2005, Terror in the Tropics channels the B spirit of the 1930s and '40s. With it's black and white photography, emulsion scratches, snappy dialogue and fondness for its subject, the film seamlessly blends modern photography with 70-year-old film clips.

Critics are raving about Terror in the Tropics!

"An homage no devoted movie fan will want to miss!"
--RICHARD GORDON, producer, Fiend Without A Face and The Haunted Strangler

"The use of scenes from some of our favorite old time black-and-white horror films is executed with style. Filled with inside jokes that will keep true horror fans howling with delight! Three thumbs up!
-- KEVIN CLEMENT, Chiller Theatre

Customer Rating:
Based on 86 ratings.


Granted this was supposed to be s poof of the old horror movies but it is done so poorly with such terribly amateur actors, I find it almost insulting. Not for me at all!


It's always good to see Poverty Row clips, and classic film lines and silly jokes bring back fond remembrances of lazy Saturday afternoons in front of the TV.


Nice change of pace from oh so serious DVDs with messages. The only message here is either laugh with us or at us, but just laugh.


This movie was a lot of fun. If you like the old poverty row horror movies of the 30's and 40's I think you will enjoy this spoof.


You've got to give Alpha Video credit-few small companies would take a bet on a movie like this...and I think we're all better off for it. THANKS ALPHA! Oh, the movie was a hoot.


Bela and Boris ROCK. This DVD was a ton-o-fun. Also saw Redfield in "Jekyll & Hyde" (also available from Alpha Video) -- which was also a neat flick.


I was a tad hesitant about ordering this DVD -- but at $8, I figured "What the heck?" I must say, I was pleasantly surprised by both the production values and the overall product. An interesting concept, and interesting execution. Well worth the investment and the time I spent watching it.

Okay comedy has too much new footage and not enough old Movie Lover: Stephen Kopian from Glen Head, NY US -- February, 5, 2006


One of the better Alpha New Cinema releases is a major disappointment in that much of this movie is new shot on video footage. Yes, its an okay homage to the Poverty Row films of old, but since this was billing itself as being in the style of Dead Men Don't Wear Plaid I was hoping for more interaction between old and new characters. There is some, but not enough, or rather too much of it seems to be simply stock shots to set the scene. Funny in a knowing sort of way its fun for a film film, who can let go of the fact that like many of the Poverty Row movies of old the promised actors are just come ons. Rating based solely on disappointment factor, the movie is better than that.