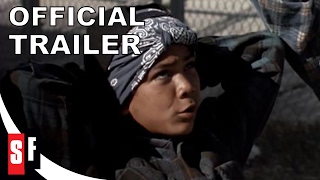 "Want me to walk away from this' No way, man."
- Gang Member

After the events of the previous decade in Los Angeles, this 1988 film about L.A. street gangs as seen through the eyes of the LAPD represented a serious effort to throw some light on the appalling carnage of that world in which, for example, 400 gangbangers were killed in 1987, the year the film was in production. It stars Robert Duvall as Mike Hodges and Sean Penn as Danny McGavin, veteran/rookie cop partners attached to CRASH, the LAPD's gang-supression unit. Hodges has been working South Central for years and has the gangbangers' respect for his low-key, quid pro quo demeanor. Despite his partner's admonitions, McGavin wants to play Rambo, bringing the hammer down on gang members at every opportunity. Ultimately the rage that drives the younger man destroys his relationship with his girlfriend, Louisa Gomez (Maria Conchita Alonso), and raises questions as to whether he should even be allowed to wear a badge. While considerable attention is paid to the complicated rubrics of gang culture, the gangbangers remain shadowy, nearly anonymous figures, especially compared to later portrayals. COLORS is a solid film, featuring superb performances by Penn and Duvall, excellent photography by Haskell Wexler, and a killer soundtrack.

An examination of L.A.'s gang problem, framed as a cop drama, COLORS stars Robert Duvall as Mike Hodges and Sean Penn as Danny Gavin, members of the LAPD's gang-control CRASH (Community Resources Against Street Hoodlums) unit. Paired as a team, veteran Hodges tries to teach explosive rookie Gavin that a laid-back style is more effective in dealing with gangbangers than his macho, take-no-prisoners approach. But, as usual, the younger man chooses to learn the hard way.

Blood In, Blood Out (DVD)
$6 Super Savings
Add to Cart