Bury the grudge. Burn the village. See the saw. 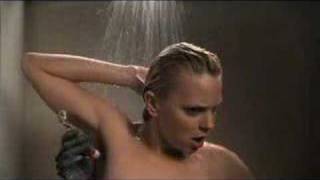 No spoof is left unturned in director and parody-meister David Zucker's SCARY MOVIE 4, the latest installment in the popular horror-cum-humor series. Among several returnees from previous films, Anna Faris reprises her role as Cindy Campbell, the eternally unlucky and hilariously clumsy heroine. In a send-up of 2004's THE GRUDGE, Campbell is assigned as full-time nurse to a mysterious old lady in a house haunted by the ghost of a small boy. In a takeoff of 2005's WAR OF THE WORLDS, next door lives Tom Ryan (Craig Bierko), a divorced dock worker somewhat in charge of his two kids, who is called into action as Alien TriPods (remove the "Tr" for a hint at the inspiration for their invention) seek to destroy Earth. The two meet and quickly fall in love. Joined by Cindy's ever-present sidekick, the flirtatious Brenda Meeks (Regina Hall), the protagonists must save the planet from aliens and solve the mystery of the ghostly boy. One of the stops along the way includes a sharp lampooning of THE VILLAGE, complete with appearances from SCARY MOVIE veterans Carmen Electra and Chris Elliot, and other cinematic spoofs, including BROKEBACK MOUNTAIN, MILLION DOLLAR BABY, and SAW. The satirical wit extends beyond the movies, containing personal jabs both self-inflicted (Charlie Sheen, Shaquille O'Neal, and Dr. Phil) and not (Mike Tyson, Michael Jackson, and George W. Bush). Ultimately, there is more than enough funniness to sate the SCARY MOVIE or slapstick comedy fan's appetite.