117K ratings
Currently Out of Stock: We'll get more as soon as possible
Notify Me When Available
Add to Wishlist
Format:  DVD
sku:  XRI 79159D
Also released as:
The Matador for $4.78
The Matador (Full Screen) for $4.78
El Matador for $3.18
Our customers love us! 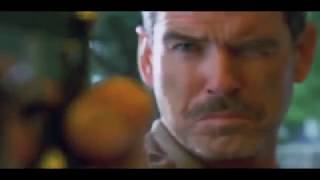 Pierce Brosnan is outstanding as an international hit man falling apart at the seams in Richard Shepard's dark comedy THE MATADOR. Brosnan, riffing on his success playing the very well groomed and genteel James Bond and Remington Steele, stars as Julian Noble, a no-longer-noble hit man who spends his free time getting drunk and chasing impossibly young skirts. In Mexico he meets Danny Wright (Greg Kinnear), an average Joe trying to land an important business deal. Jealous of Danny's simple life, Julian becomes friends with the Denver suburbanite, who married his high school sweetheart, Bean (the very good Hope Davis), but lost his young son in a terrible accident. One day at a bullfight, Julian tells Danny what he does for a living, but Danny doesn't believe him--until Julian shows him an example of his expertise. But when Julian asks Danny to help him with his next assignment, Danny is dead-set against it, and ready to end their brief friendship. Little does he know that he has not seen the last of the rather unique hit man.

Writer-director Shepard, whose previous work includes the indie films OXYGEN, MERCY, and THE LINGUINI INCIDENT, shows a deft hand for offbeat comedy in THE MATADOR, a very funny movie with a razor-sharp edge to it. Brosnan and Kinnear make a great duo, the latter the straight man to the former's reckless abandon. Shepard keeps the laughs coming with huge titles announcing the different locations as well as with a brilliant soundtrack featuring songs by Tom Jones and Asia in addition to the Jam, the Killers, and the Cramps--whose "Garbageman" anchors a hysterical scene involving Julian, a can of beer, a pair of Speedos, a hotel lobby, and a shark.