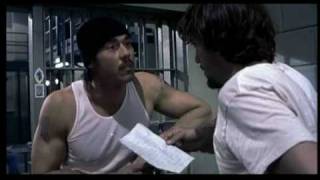 Playing God has its consequences, which is the theme of the tricky time-travel shockfest THE BUTTERFLY EFFECT. J. Mackye Gruber and Eric Bress, who share writing and directing credits, make a splash with a gripping script that never fails to throw twists and loops into the plot. Both thematically and visually, the film is similar to the perfect commercial filmmaking in the team's script for FINAL DESTINATION II.

Here, Evan Trehorn (Ashton Kutcher) is a college student who has suffered from blackouts and memory loss since he was a child. Tormented by deeply repressed childhood memories, he has visions of his best friend and first love Kayleigh (Amy Smart) as a child (Irene Gorovaia) whose Dad (Eric Stoltz) is a child molester, and whose brother Tommy has a serious sadistic streak. In search of greater clarity, Evan pores over his journals and is physically transported back in time where he is still a young boy (John P. Amedori) and has the ability to change what happened. But soon he realizes that changing history has caused calamitous results elsewhere. A mesmerizing thriller with a dark underlying mystery, THE BUTTERFLY EFFECT is delightfully chilling.