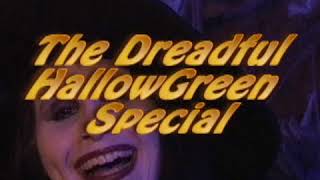 DVD includes the extended cut of the film, with footage not aired in the original half-hour broadcast version. In addition to "The Dreadful Hallowgreen Special," the DVD includes an all new half hour special entitled "Trailer Terror" hosted by Penny Dreadful & Dr. Gangrene, which has the hosts introducing some of their favorite classic horror film trailers.

"Dr. Gangrene's Creature Feature" airs on its home station WNAB CW58 in Nashville TN. Portrayed by Larry Underwood, the "Good Doctor" has been shocking the Scare-waves since 1999, and his programs have been nominated for two Emmy Awards for Public Service.

This offbeat comedy special brings together the performers Penny Dreadful, Doctor Gangrene, Count Gore de Vol and the werewolf Garou. As the story begins, Halloween teeters on the verge of being completely destroyed by sorcery: pumpkins turn from orange to pink, and ghouls and goblins drop their penchants for spooking and begin to exhibit friendly behavior! in response, Penny, Gangrene and the others enlist the help of reverse magic to rescue the holiday that they love so dearly.

Werewolves | Halloween | Magic | Television / TV Series
This product is made-on-demand by the manufacturer using DVD-R recordable media. Almost all DVD players can play DVD-Rs (except for some older models made before 2000) - please consult your owner's manual for formats compatible with your player. These DVD-Rs may not play on all computers or DVD player/recorders. To address this, the manufacturer recommends viewing this product on a DVD player that does not have recording capability.

The Nightmare Before Christmas (Blu-ray)
$17.60 Super Savings
Add to Cart