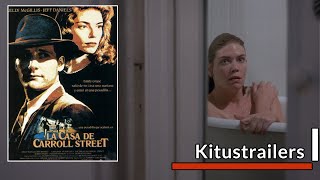 In 1951, Emily Crane (Kelly McGillis), a Life magazine photography editor, is fired from her job for refusing to name names in a House Un-American Activities Committtee hearing. Undaunted by the extreme climate of McCarthyism and repression, Emily continues to associate with her liberal friends and takes a new job as a caretaker and reader for Miss Venable (Jessica Tandy), an elderly woman in her neighborhood. One day while working for Miss Venable, Emily overhears a suspicious conversation taking place in the house next door. She begins to suspect that she has stumbled upon a conspiracy to smuggle Nazi war criminals into the United States using the identities of dead Jews--a siniser plot that is being orchestrated by Selwan (Mandy Patinkin), a highly respected public official who led the investigation against her. Unfortunately, because Emily has been labeled a subversive and a communist, no one believes her, except for FBI agent Cochran (Jeff Daniels)--the love-struck agent assigned to follow her--and the conspirators themselves. As Emily and Agent Cochran hunt for the truth, they become entangled in a web of murder and intrigue that threatens their lives. Peter Yates's enchanting period thriller ends with a grand Hitchcockian finale in New York's Grand Central Station.