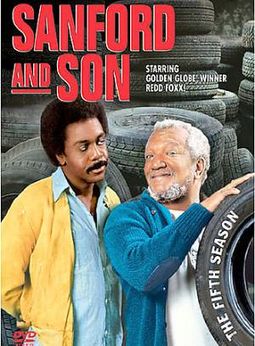 The fifth season of this sitcom starring Redd Foxx as the title character, Fred Sanford, a 65 year old junk dealer who lives in the Watts housing complex in LA with his grown son, Lamont. Lamont is a reluctant partner in the business, always threatening to leave but retained by Fred's feigned heart attacks; Fred, meanwhile, is a crotchety fellow with a heart of gold, and both characters are constantly coming up with get rich quick schemes that consistently backfire. Other characters include the zealous Aunt Esther Anderson, Fred's main squeeze Donna Harris, and various friends and acquaintances of both father and son. This season sees Donna and Fred discussing marriage while Esther gets fed up with hers, and the Sanfords' new business venture, a boarding house called the Sanford Arms, which also supplied the name and premise of a spin-off of the show.