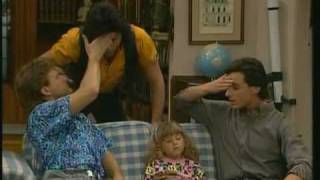 Appearing during the family comedy's height of popularity in the 1980s and 1990s, FULL HOUSE focuses on an unconventional household in San Francisco. After the death of his wife, Danny Tanner (Bob Saget) enlists the help of his friend Joey (Dave Coulier) and brother-in-law Jesse (John Stamos) to help raise his daughters. In the fifth season, oldest daughter D.J. (Candace Cameron) gets her learner's permit, Michelle (Mary-Kate and Ashley Olsen) starts kindergarten, and middle child Stephanie (Jodie Sweetin) gets the chance to meet a beloved pop star. But the girls don't get to have all the fun, as each of the men has a brush with stardom. Jesse's rock star dreams may be realized when he gets the chance of a lifetime thanks to the Beach Boys; a local magazine names Danny "Bachelor of the Month," and he finds love; and Joey joins the cast of a children's television show. Plus, the house gets even more crowded as Jesse's wife (Lori Loughlin) gives birth to twins. The more the merrier really is true in this house, where the laughter, love, and lessons abound.