Get email alerts for Johnny Cash
220 ratings
Available: Usually ships in 1-3 business days
14 copies available
Add to Cart
Add to Wishlist
Format:  CD
sku:  32A59
Related products:
Very Best of Johnny Cash - I Walk The Line for $5.98
Johnny Cash: Get Rhythm / Story Songs of Trains And Rivers for $8.98
Our customers love us! 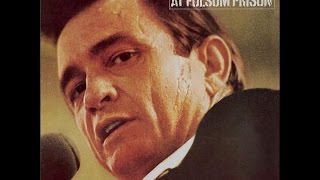 Rolling Stone - 12/11/03, p.116
Ranked #88 in Rolling Stone's "500 Greatest Albums Of All Time" - "...Essential Cash....The 2,000 inmates roar their approval..."
Spin - p.86
"[A] legendary 1968 concert, activist entertainment on a par with Bob Dylan and Public Enemy."
Entertainment Weekly - 9/26/03, p.34
"...You get the sense that Cash could just as easily be in the audience as on stage at this raucous show, and the inmates know it..."
Q - 4/00, p.106
4 stars out of 5 - "...represents Cash at the peak of his powers, bringing a highly combustible mixture of joy and pain to 2000 excitable inmates....Any more real and full body armor would have had to be supplied."
Uncut - p.66
"'Folsom Prison Blues' is the inevitable lead-off of this spirited live album, which freights a joyful vim at odds with its surroundings."
Uncut - 3/00, p.74
4 stars out of 5 - "...It's an effortless and powerful performance....Touching..."
CMJ - 11/1/99, pp.24-5
"...finally receiving a proper...reissue....Restored is Cash's salty stage-banter in all of its uncensored glory, alongside every one of the crowd's raucous, foot-stomping, hollering responses....repeatedly delivers the kind of goosebumps that few records can."
Dirty Linen - p.46
"Backed by the Tennessee Three, rockabilly guitarist Carl Perkins, and vocal group the Statler Brothers, the 'Man in Black' delivered a passionate mix of unsweetened folk balladry, honky tonk, blues and country gospel."
Dirty Linen - 2-3/00, pp.63,65
"...an impressive performance document that gives a fuller sense of Cash's stage persona and his relationship with the audience....The song order has been corrected to the original performance....[with] 3 previously unreleased songs..."
Q (Magazine) - p.123
5 stars out of 5 -- "[I]t chimed perfectly with the rebellious spirit of the times, becoming a turning point for country music..."
Mojo (Publisher) - p.123
4 stars out of 5 -- "Savour this for the original show in all its primal glory."
Paste (magazine) (p.60) - "Cash's performance of inmate Glen Sherley's 'Greystone Chapel' is the highlight....It's no exaggeration to say that JOHNNY CASH AT FOLSOM PRISON is his masterwork."
Clash (Magazine) (p.97) - "AT FOLSOM PRISON is a record that has long been considered one of the most influential albums of the '60s....The raw vibe of the performance is captured perfectly..."

Personnel: Johnny Cash (vocals, guitar); Johnny Cash; Al Casey (guitar); Carl Perkins (electric guitar); Marshall Grant (bass guitar); June Carter Cash, The Carter Family, The Statler Brothers (vocals); Luther Perkins (electric guitar); W.S. Holland (drums).
Audio Mixer: Vic Anesini.
Liner Note Author: Johnny Cash.
Recording information: Folsom Prison (01/13/1968).
Author: Woody Pornpitaksuk.
Photographer: Jim Marshall .
Want to hear part of the reason why Johnny Cash is an icon, a singer respected and influential in country, folk, and rock & roll? THIS is it! In 1968--one of the most tumultuous years in American history since the Depression years--Cash recorded an album live in front of a (literally) captive (but wildly appreciative) audience, in Folsom Prison. With two guitars, bass, drums, and a small vocal group (including Cash's wife June Carter Cash and the Statler Brothers), Cash sings his hits and lesser-known songs ("Send a Picture of Mother") and some haunting country standards ("Dark as a Dungeon"), as well as songs about REAL outlaws ("Cocaine Blues") to a rapt audience that hangs on every word. That boom-chicka-boom sound is sharp as the first mean wind of winter, and Cash is in fine fettle (though his voice cracks from time to time). With its unique setting, this is as harrowing an album as any ever recorded.