A tribute to Ray Harryhausen’s sword-and-sandal epics from ‘Monster Kid’ auteur Joshua Kennedy! Plus the stop-motion short “Night of the Beast (From Twenty Zillion Years Ago).” 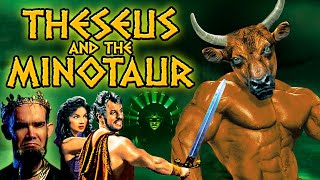 THESEUS AND THE MINOTAUR (2017) - Official Trailer

Joshua Kennedy has been inspired by vintage horror and sci-fi practically since he was born. He made his first movie, It Came From The Bathroom, at the age of five. By the time he turned sixteen, his breakout hit The Attack of the Octopus People (2011) had been released on DVD. With storylines that reference the classics and ingenious homegrown special effects, Joshua's films appear to be from another era, and are guaranteed to bring a smile to old-school fans. Now he tackles the ancient Greek myths with Theseus and the Minotaur, an affectionate tribute to Ray Harryhausen adventure classics like Jason and the Argonauts (1963) and Clash of the Titans (1981).

In Athens, mad King Minos rules with an iron fist. He sacrifices innocent young men and women to the Minotaur, a horrible monster with the the head of a bull and the body of a man. Only one man can stop him...Theseus, the son of a god with a heart of gold who is destined to be the hero of Athens.

The fourteenth film from writer/director/star Joshua Kennedy, Theseus and the Minotaur had its successful world premiere at the 2017 Monster Bash convention in Mars, PA. This version contains extra footage and a new monster not seen in the world premiere. The stop-motion special effects are provided by Ryan Lengyel.

Fantasy | Monsters
This product is made-on-demand by the manufacturer using DVD-R recordable media. Almost all DVD players can play DVD-Rs (except for some older models made before 2000) - please consult your owner's manual for formats compatible with your player. These DVD-Rs may not play on all computers or DVD player/recorders. To address this, the manufacturer recommends viewing this product on a DVD player that does not have recording capability.

Customer Rating:
Based on 23 ratings.


Writer/director/producer Joshua Kennedy has proven himself one of the most versatile filmmakers on the scene today, and with his latest Gooey Film production, "Theseus and the Minotaur", he takes his imaginative skills to even greater, spellbinding heights.
This magnificent, sword-and-sandal/peplum homage caters to (as the title more than implies) the great, Greek myth of Theseus, the Athenian who came to slay the mighty hybrid beast in its labyrinth lair. The Minotaur, as most know, was conceived as a result of an intricate (and rather perverse) path, thanks to dear ol’ King Minos' meddling ways. Out of spite, he even sacrificed warriors to the bloodthirsty creature. This legend refashioned in the film, wisely placing emphasis Minos' quest for the Sword of Zeus; his use of the dreaded Minotaur to maintain his sadistic control; and ultimately, Theseus’s journey to defeat the power-hungry despot and his mighty monster to become Athens' king.
The cast is ideal and credible in its execution of the myth, with Marco Munoz as the charismatic and courageous Theseus; Jamie Trevino as the feisty yet coerced Ariadne; Brian Warren as the comical Backhos; Tom Pearson as his equally comical companion, Kastor; Bo Elizondo as the combative but redemptive Deimos; Michael Alebis as the doomed King Aegus; Ana Kennedy (Joshua's mom) as the maternal Aethra; Gus Kennedy (Joshua's dad) as the warm and wise Gregorios (who at one significant point does a remarkable job channeling the great Patrick Troughton); and bestowing his fans with another crisp, grandiose performance, the writer/director/producer, himself, as the crafty King Minos. (I must say, Kennedy does an amazing job, giving his character the ideal air of magical, entitled petulance, worthy of any past, peplum nemesis.)
Story-wise, Kennedy's script covers ground well beyond the Theseus myth, giving his audience aspects of Silvio Amadio's "Minotaur, Wild Beast of Crete"; Ray Harryhausen/Charles H. Schneer's "Jason and the Argonauts" and "Clash of the Titans"; Steve Reeves and Reg Park's Hercules adventures; and all those gutsy (and for the sake of English-speaking audiences), renamed Maciste outings. Kennedy not only mimics the look and feel of those epic endeavors, but does so in such a way that his story falls flawlessly among them. In other words, "Theseus and the Minotaur" isn't just a wannabe; it's the real deal.