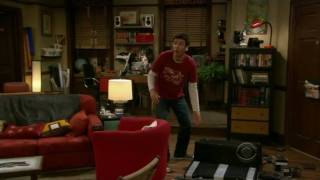 How I met your mother - Super Trailer

Though HOW I MET YOUR MOTHER has the look of a traditional, multi-camera sitcom, this comedy has all the fun and smarts of fellow critical darlings 30 ROCK and ARRESTED DEVELOPMENT. Told via a giant flashback, the twist-filled series is narrated from the perspective of Ted Mosby (the unreliable, disembodied voice of Bob Saget) in the year 2030 as he tells his daughter and son how he met their mother more than 20 years ago. Young Ted (Josh Radnor) is inspired by the romance of his roommate Marshall (FORGETTING SARAH MARSHALL's Jason Segel) and Lily (BUFFY's Alyson Hannigan), and he decides to embark on his own search for love. Aided in his quest by wingman Barney "Have you met Ted'" Stinson (Neil Patrick Harris), Ted looks all over New York City for the future Mrs. Mosby. As season three begins, Robin (Cobie Smulders) returns home from Argentina, and she finds a few new men to help her move past her romance with Ted. For her ex, his normally fun-filled friendship with Barney is in trouble when Barney does the unthinkable: he breaks the Bro Code. Meanwhile, Marshall and Lily almost miss the chance to land their dream apartment in the Dowisetrepla neighborhood thanks to Lilly's compulsive shopping habit. This box set includes all 20 episodes of HOW I MET YOUR MOTHER's hilarious third season, including multiple appearances from SCRUBS' Sarah Chalke and pop star Britney Spears.

The search for a soul mate has never been so hilariously inappropriate! High five with Ted, Barney, Robin, Lily and Marshall when the awesome comedy "How I Met Your Mother' Season Three arrives on DVD on October 7th from Twentieth Century Fox Home Entertainment. The top-rated series about architect Ted Mosby, who is determined to find love in New York City, features a hot, young ensemble cast including Josh Radnor ("Freaks & Geeks'), Jason Segel (Forgetting Sarah Marshall), Alyson Hannigan ('Buffy the Vampire Slayer," Date Movie), Cobie Smulders ("The L Word') and 2007 Emmy® Award-nominee Neil Patrick Harris ("Doogie Howser, M.D.," Harold & Kumar Go To White Castle). Told through a series of flashbacks, an older and off-screen Ted (Bob Saget, "Full House") tells his children tales of his single days with his best friends, the highs and lows of dating and how he ultimately 'met their mother.'