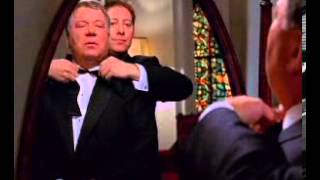 Disc 1: "Head Cases," "Still Crazy After All These Years," "Catch and Release," "Change of Course"

BOSTON LEGAL, a wry courtroom television show that walks the line between drama and comedy, is the creation of perennial hit-maker David E. Kelly (ALLY MCBEAL, PICKET FENCES). BOSTON LEGAL revolves around the Boston litigation law firm of Crane, Poole, & Schmidt, in particular two eccentric and flawed attorneys, Alan Shore and Denny Crane. Shore, an unscrupulous and wily ambulance chaser and womanizer (played, with sly charm by James Spader) finds an uneasy alliance with Crane, a bombastic, self-aggrandizing, and occasionally batty elder lawyer (William Shatner in an Emmy-winning performance). Despite their ethical and emotional deficiencies, Shore and Crane usually find themselves fighting on the right side, as they take up cases that no one else is willing to touch. The 17-episode first season kicks off with quirky flair, full of oddball situations including: Shore, on a dare, taking the case of an African-American actress denied the role of Annie; Crane caught having an affair with the firm's biggest client; Shore representing an ex-lover who had attempted to murder him; Shore defending a millionaire CEO caught shoplifting, and a Santa fired for being a transvestite. Adding even more mayhem to the madcap cases, the sexual chemistry at the firm begins to boil over, and both Shore and Crane find themselves compromised with the various female lawyers.