Two homages to the monster movies of the past: 'The Fungus Among Us' - A deadly alien fungus stalks four sexy female crooks holed up in an abandoned house. 'Slimoids' - A mad scientist unleashes three bloodthirsty, slimy creatures on mankind. 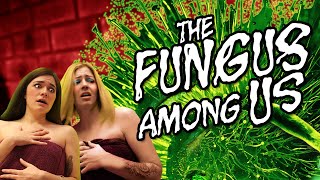 THE FUNGUS AMONG US (2018): Four sexy female crooks encounter car trouble during a thunderstorm, and find refuge in an abandoned house. Stripping out of their soaked clothing, the girls try to relax until the storm subsides. Little do they realize that the house is infested with a deadly fungus from another world. A fungus that takes over human bodies and bends them to its will. As the girls bicker and argue, the extraterrestrial mucus sneaks up behind them, seeking to possess their nubile flesh…

Called "a Russ Meyer Faster, Pussycat! Kill! Kill! homage crossed with black and white Sixties SF horror" by the Hugo Award-winning Clarkesworld Magazine, The Fungus Among Us is Joshua Kennedy's latest tribute to classic movies of the past. Shot over the course of multiple weekends in October 2017, Kennedy drew inspiration from films as diverse as The Blob (1958), Horrors of Spider Island (1960), The Green Slime (1968), The Taking of Pelham One Two Three (1974) and, of course, the plunging necklines of Meyer's Faster, Pussycat! Kill! Kill! Joshua Kennedy has been inspired by vintage sci-fi and horror all his life. He made his first movie, It Came From The Bathroom, at the age of five. By the time he turned sixteen, his breakout hit The Attack of the Octopus People (2011) had been released on DVD. With storylines that reference the classics and ingenious homegrown special effects, Joshua's films appear to be from another era, and are guaranteed to bring a smile to old-school fans.

SLIMOIDS (2018): After his sister is killed, Dan Stewart finds himself the prime suspect in a murder investigation. As more bodies start piling up, the real assailants are revealed to be three gruesome creatures, with the ability to secrete a slime that dissolves human flesh. They are the creations of a vengeful female scientist determined to destroy mankind. It's a race to stop her as Dan and two world-weary detectives face off against the greatest threat to humanity the world has ever known...THE SLIMOIDS.

Slimoids (pronounced slime-oids) is inspired by writer-director Sébastien Godin's love of "little creature" monster movies like Gremlins (1984), Ghoulies (1985), Munchies (1987), Hobgoblins (1988), and the Puppet Master series (1989-present). The "Slimoid" puppets were created by Dustin Mills before there was any script. Godin ended up tailoring his screenplay to their outlandish designs. Canadian B-movie director Brett Kelly co-stars along with a cast of victims that includes Luc Bernier (A Blood Story), Dave Parker (Headless), and Rob Ceus (Zombies From Sector 9). Sébastien was also able to enlist 80s B-movie scream queen/model Brinke Stevens as the voice of the mad scientist (her physical form is played by Mairead Traxler.) Slimoids is, in the words of Jacob Dressler of the website Brainmutant.com, "...a treat for any fan of old school B-movies who just wants to sink their teeth into some slimy sludge and gore. Imagine…David Cronenberg".

25%off
Sexpots From Space Double Feature: Voyage To The Planet of... (DVD-R) TOP 25 Bestselling DVD
$5.95 ENDS TONIGHT
Add to Cart