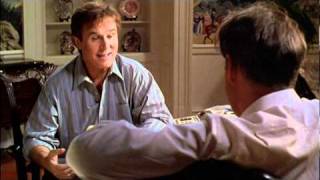 Alan Simpson who appears in a cameo and Bill Clinton agree that the movie "kind of gives you a warm feeling."
- Jeff Giles, NEWSWEEK 5/10/1993
"I basically make grand entertainments...I hate pretentious filmmaking." Director Ivan Reitman on "Dave."
- Jeff Giles, NEWSWEEK, 5/10/1993
"In 'Dave,' he would basically let me do what I wanted...Then he would ask me to do what he saw. Then he would say, 'Do what you want.' In those takes after his directon, I could satisfy both of us." Sigourney Weaver talking about director Ivan Reitman.
- Randall Rothenberg, NEW YORK TIMES, 5/2/1993

A presidential look-alike finds himself in the oval office "filling in" for the president who has fallen ill. Lacking the political savvy of the real president, "Dave" proceeds to govern the country with a refreshingly straight-forward approach. Academy Award Nominations: Best (Original) Screenplay.

Kevin Kline and Sigourney Weaver star in this box-office winner about an uncanny Presidential look-a-like recruited as a momentary stand-in for America's Chief Executive. However, things don't turn out exactly as planned and Dave finds himself continuing the masquerade indefinitely.
Ivan Reitman (Ghostbusters) directs and supporting players Frank Langella, Ving Rhames, Ben Kingsley and Charles Grodin supply more reasons to stand up and cheer. Real-life Washington politicos and pundits join the fun as Dave uses ordinary-guy savvy to deal with the extraordinary responsibilities of the Oval Office.

Judging by their looks, conservative United States President Bill Mitchell and liberal minded temp-agency owner Dave Kovic could be identical twins separated at birth. When two Secret Service agents, at Chief-of-Staff Bob Alexander's request, clandestinely draft Dave into servicing his country by temporarily standing-in for President Mitchell, the carefree humanitarian gladly answers his call to duty. After all, as the President's look-alike Dave has aped austere Mitchell before.
Luckily, the plan goes off without a hitch. But in an ironic twist of fate, President Mitchell is incapacitated, leaving Dave in a political hot-spot. Once Dave takes the extraordinary opportunity to implement progressive programs, reduce the national deficit and significantly effect social change, he nearly overturns Mitchell's reactionary administration, even as the very handlers begin conspiring against him.