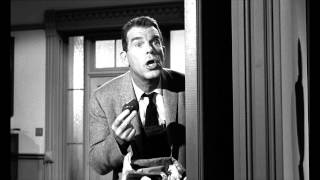 A distracted professor invents an anti-gravity goo called Flubber that makes anything it's applied to lighter-than-air, including the family flivver and the balls at the school's basketball game. MacMurray couldn't be better in patented Disney fare. Sequel is Son of Flubber. Academy Award Nominations: 3, including Best (Black-and-White) Cinematography (though the film later was colorized).

The Absent-Minded Professor
Hailed as one of Walt Disney's most hilarious comedies, THE ABSENT-MINDED PROFESSOR contains two essential elements for laughter -- Fred MacMurray and Flubber, his gravity-defying formula for flying rubber! You'll visit Medfield College and delight in the fun when Professor Brainard (Fred MacMurray) uses Flubber to put more bounce in the basketball team, fly a Model "T" Jalopy over Washington, D.C., and save Medfield College from financial ruin! Join a brilliant cast full of your favorite Disney stars: Ed Wynn as Medfield's bumbling Fire Chief, Keenan Wynn as the evil-minded Alonzo Hawk, and Nancy Olson as the college secretary who the Professor has absent-mindedly left at the altar ... three times! It's high-flying fun for the entire family!

A professor invents an anti-gravity goo called flubber that makes anything it's applied to lighter-than-air.

17%off
Something Wicked This Way Comes
$12.50 Super Savings
Add to Cart

Honey, I Shrunk the Kids
$5.80 Super Savings
Add to Cart