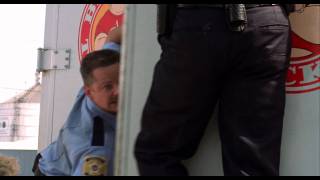 USA Today - 01/17/2003
"...NATIONAL SECURITY surprises by emphasizing well-oiled interplay between its co-leads....The picture is all Lawrence and Zahn, whose dynamics get something going..."
Los Angeles Times - 01/17/2003
"NATIONAL SECURITY, a funny, raucous action comedy, effectively teams Martin Lawrence and Steve Zahn in a film that's both laugh out loud funny and surprisingly subtle..."

Martin Lawrence stars in this action comedy directed by Dennis Dugan (HAPPY GILMORE). The film concerns an unlikely partnership that forms between two L.A.P.D. rejects. Hank (Steve Zahn) is a straightlaced L.A.P.D. officer who is fired after supposedly brutalizing an innocent black man. It turns out the "victim," Earl Montgomery (Lawrence), is actually just an angry citizen who is allergic to bee stings. Frustrated after being dismissed from the L.A.P.D. academy due to his bad temper, Earl seizes the opportunity to take out his rage on the hapless Hank. But six months later, when Hank is released from prison, he is determined to avenge the death of his partner. Their paths cross once again when Nash (Eric Roberts), the man who pulled the trigger, robs the warehouse where Earl is employed as a security guard. Angry that Nash refers to him using a racial slur, Earl attaches himself to Hank, who wants nothing to do with the trash-talker. But Earl won't back down, and the bickering pair begin to infiltrate the crooked police department that rejected them months before. NATIONAL SECURITY features yet another standout supporting turn from the always reliable Zahn.

When Martin Lawrence (Bad Boys) and Steve Zahn (Daddy Day Care) team up as security guards, no one's safe! LAPD reject and major troublemaker, Earl (Lawrence), got L.A. cop Hank (Zahn) kicked off theforce for brutality. Now, these two guys, who can't stand each other, are stuck working together aslowly security guards. And they're playing cops to bring down a smuggling ring if they can stay alive and stay one step ahead of the real cops. Co-starring Eric Roberts (The Specialist), NATIONAL SECURITY will take you on a wild ride with the most unlikely heroes ever to wear a badge!