A tale of murder, lust, greed, revenge, and seafood. 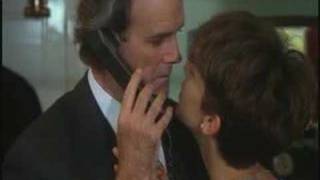 "I used to box for Oxford."--Archie (John Cleese)
"I used to kill for the CIA."
- Otto (Kevin Kline)
"To call you stupid would be an insult to stupid people. I've known sheep that could outwit you. I've worn dresses with higher I.Qs."
- Wanda (Jamie Lee Curtis) to Otto
"Wanda, do you have any idea what it's like being English' Being so correct all the time, being so stifled by this dread of, of doing the wrong thing, of saying to someone 'Are you married'' and hearing 'My wife left me this morning,' or saying, uh, 'Do you have children'' and being told they all burned to death on Wednesday' You see, Wanda, we're all terrified of embarrassment. That's why we're so dead. Most of my friends are dead, you know, we have these piles of corpses to dinner. But you're alive, God bless you, and I want to be, I'm so fed up with all this. I want to make love with you, Wanda. I'm a good lover--at least I used to be, back in the early fourteenth century. Can we go to bed'
- Archie to Wanda
"Not you, Ken; you've got a beautiful speaking voice--when it works."
- Otto to Ken (Micahel Palin)

In A FISH CALLED WANDA, veteran director Charles Crichton and scriptwriter-star John Cleese create a dazzling quilt from various strands of English and American comedy. The plot, in which four disparate characters attempt a daring heist, comes from Ealing caper comedies, such as Crichton's own THE LAVENDER HILL MOB. Cleese and Michael Palin, as the hit man with a stutter and a love of animals, come from the anarchic tradition of Monty Python. The movie pays savage tribute to another Ealing comedy, THE LADYKILLERS, as Palin attempts to kill a witness to the gang's getaway. The glamorous con woman (Jamie Lee Curtis) is from Preston Sturges's great comedy THE LADY EVE, while Kevin Kline provides his own unique feverish comic intensity.

But, in the midst of this breathless comedy, something else happens. The barrister, Archie Leach (Cleese), who is defending one of the gang, is jolted out of his tight-laced British existence by Curtis's life force. And Curtis--like Barbara Stanwyck in THE LADY EVE--falls into her own trap: falling in love with the man she's conning. The 78-year-old Crichton never before had such rich material. He times everything in this brilliant comedy with the precision of a Swiss watch.

An odd quartet of thieves pulls off "the big jewel job," but only the brains of the operation knows where the gems are hidden. Unfortunately he's in prison and needs his stuffy defense counsel--and so do the other gang members--to go get the stash for them.

Bruce Springsteen
Western Stars (Blu-ray)
$32.39
Out of Stock
Save for Later