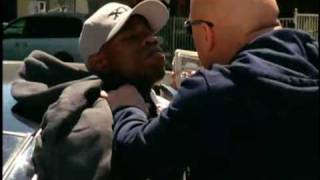 Transgressing the seemingly rock-solid boundaries of regular television programming, THE SHIELD refuses the strictures of black-and-white depictions of clear-cut moral dilemmas in favor of an ambiguity that will challenge even the most jaded viewers. Detective Vic Mackey (Michael Chiklis, THE COMMISH) leads the elite Strike Team in the fictional L.A. district of Farmington. He employs dubious but effective crime fighting methods as a tough, successful, but corrupt cop. The other detectives and cops on the force disapprove of the Team's methods, to say the least, while the precinct head, Captain David Aceveda (Benito Martinez), is just as corrupt as Mackey, but his political aspirations lead him into a campaign to end the detective's career. The stoic, upright Detective Claudette Wyms (CCH Pounder, ER, BOYCOTT), who understands both sides of the game, provides a much needed balance and rationality to the mix. The charismatic Mackey strikes just the right pitch so as to be the least sympathetic antihero television has yet seen, while retaining his audience, who refuses to write him off quite yet. Meanwhile, the controversial themes and violent nature of the content manage the effect--inconsistent at best in TV programming--of making audiences really think about what they're watching. Included here is the entire fourth season.